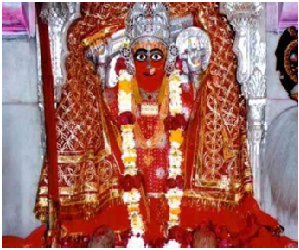 Ashapura Mata is one of the forms of Mata Shakti Devi, and her temple is considered as the main shrine in Gujarat. She is the one who satisfies the necessary needs and wishes of her sincere devotees, and she also removes the diseases and sins of her devotees. She is said to have taken her abode in Gujarat in order to remove the tears of her beloved devotees.

She is also considered to be the incarnation of Mata Durga Devi and Annapurna Devi, and many of her devotees in the villages of Gujarat consider her to be their Ishta Devata. She is worshipped as Kuladevi by the people belonging to certain community, who are living in Gujarat and Rajasthan. This temple is believed to have been built by the Rajasthani kings before few thousand years, and it was subsequently renovated by the kings and by the local landlords.
Every year during the Navratri festival days, grand celebration would take place at this temple, and large number of devotees from all parts of India, would visit this holy temple, in order to thank their beloved goddess, Ma Ashapura Devi.

Since Ma Shakti Devi killed a powerful demon at the present place of the temple, this temple came to be known as Ashapura Mata Temple. Ma Ashapura is also having temples in some parts of Rajasthan, and also in Pune, Bangalore and Mumbai.

Mata Parvati Devi also known as Shakti Devi and Durga Devi and by several other names is our holy affectionate mother goddess, who is having temples in various names throughout India.

We are all humans, and daily we are suffering either from some big or from some small problems in our life.  Living our life without devoting the god cannot be imagined by us in this today’s tough life. We didn’t know the reason for our happiness or for our sufferings. But the great almighty knows about our past, present and future life also. Instead of getting worried about our life, let us put all of our burdens on the lotus feet of Ma Ashapura, and be blessed.