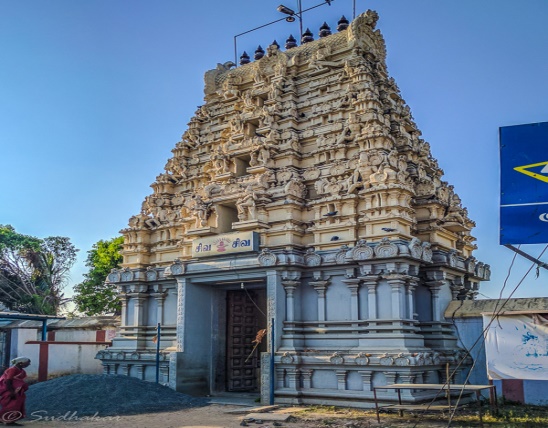 INTRODUCTION
Gnayiru Sun god temple also known as Sri Pushparatheswarar temple is situated at the Gnayiru village and it is considered as one of the sacred navagraha temples located at Chennai and dedicated to Lord Surya Bhagawan and the main deity is Lord Shiva, who is known as Lord Pushparatheswarar. For visiting this temple, bus facility is available from Red hills Bus Terminus and there are no big hotels or lodging facilities near the temple. Those who come from distant places, can have their food, and stay in a lodge at Redhills, and visit this temple either through bus or through auto. This temple had been praised in Periya Puranam. This is one of the ancient temples of Lord Surya Bhagawan.
According to legend, it is believed that once Sun God was cursed by Lord Brahma, and due to that he has lost his brightness, and in order to get relieved from the curse, Lord Suriya performed severe meditation on Lord Shiva at this temple and took bath in the sacred temple tank, and performed puja to Lord Shiva and Mata Parvati, who is called as Mata Swarnambikai.
Due to his severe penance, Lord Shiva appeared along with Swarnambikai and blessed him and relieved him from his curse.
Apart from the main shrine of Pushparatheswarar, there is a separate shrine for Mata Swarnambigai and also a separate shrine for Lord Sun. It is advisable to visit this sacred temple during Sundays, in order to get favourable results in our life. By visiting and worshipping the deities at this temple, all of our diseases would be removed from our body, and we would get good energy, and get all kinds of prosperities in our life.
Temple opens from 7.00am–12.30pm and 4.30pm-8.30pm
Contact: Sun God Temple, Arumandai Gnayiru Road, Gnayiru Gramam,
Sholavaram, Chennai.
Let us visit and worship this ancient temple and be blessed.
“OM SRI SURYA BHAGAWANE NAMAHA”
“OM NAMAH SHIVAYA”
“OM SREE SAKTHI DEVIYE NAMAHA”
WRITTEN BY
R.HARISHANKAR