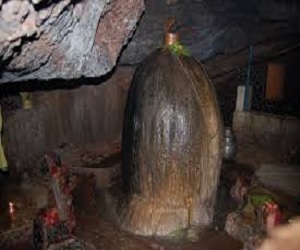 Gupteshwar Mahadev Temple is a famous temple situated in the city of Burhanpur at Madhya Pradesh. It is believed that during Amavasya and Full moon day, the great Mahabharata warrior, Ashwatthama would come to this temple, worships Lord Shiva and also would perform puja to the Shiva Lingam. He used to offer rose flowers, and apply sacred ash and Kumkum to the Shiva Lingam.

As per the curse given to Ashwatthama by Lord Krishna, he is still living in this world, and suffers from lot of health related issues, and in order to reduce his sufferings, he used to do Shiva Puja at this Gupteshwar Mahadev Temple. And it is also believed, that due to the performance of Shiva Puja, to some extent, now he is relieved from his health related problems.

When Pandavas removed a bell which was permanently fixed on his head, a small hole was formed on his head, and still now that hole is there on his head. And it is believed that in order to reduce the pain on his head, he used to apply the sacred ash of Lord Shiva throughout his body during the time of his visits to the Gupteshwar Mahadev temple on Amavasya and Pournami. And it is also believed, that after the end of Kaliyuga, during the next Satya Yuga, Ashwatthama would become the next Vyasa.

Whoever suffers from diseases, especially from head ache, are suggested to worship Lord Shiva in this temple, and apart from worshipping Lord Shiva, they can also worship Sri Ashwatthama by chanting the mantra “OM SRI ASHWATTHAMARE NAMAHA”, and “OM NAMAH SHIVAYA”.

After doing sinful acts in the Mahabharata war, Ashwattama had finally realised his mistakes, and worshipped Lord Shiva in order to remove his sins. But as per the curse of Lord Krishna, he is still suffering from diseases and worrying for his own acts, and also sometimes appears before the devotees of Lord Shiva, in some parts of Madhya Pradesh.

Let us visit this famous temple of Lord Shiva and be blessed.