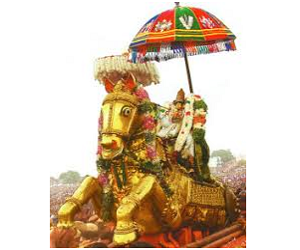 Kallazhagar Temple in situated in Alagar Koyil, Tamil Nadu, and it is a Vishnu Temple. This temple was mentioned in the Divya Prabandha, the collection of divine poems written by the Alwar saints. It is also one among the 108 Divyadesam of Lord Vishnu and he is worshiped as Kallazhagar and Mata Lakshmi is worshipped as Thirumamagal.

Kallazhagar had given his divine vision to sage Suthapava and relieved his curse, which was given to him by sage Durvasa. Daily rituals and annual festivals are properly performed at the temple, out of which the float festival performed during the Tamil month of Masi (February–March), the Navrathri festival performed during September–October and Vaikunta Ekadasi during Margazhi (December–January) are celebrated as the main festivals in this temple.  It is believed that, the Chief deity was worshiped by the death god Yama, and he requested Lord Vishnu to remain in this place and constructed a temple through the divine architect, Lord Viswakarma. There are separate shrines for Andal, Sudarshana and Yoga Narasimha nearby the main shrine of the temple.  Annual float festival is celebrated in remembrance of the marriage of his sister  Meenakshi, a form of Mata Shakti Devi, with Lord Sundareswarar, a form of Lord Shiva. During the festival, Lord Kallazhagar would cross the Vaigai River, and in order to witness the holy event, several lakhs of devotees would be visiting Madurai.

It is believed that if Unmarried people visit this holy temple and worship Lord Kallazhagar, they would get married soon. Issueless couples would get delivered noble child, if they visit and worship this holy Vishnu Temple.