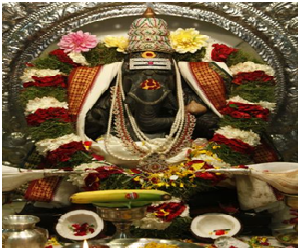 There is a small temple for Lord Vinayaka which is located in Ayanavaram, Chennai, near Joint Office Bus Stop. Though this is a small temple, but the deity present here is very powerful. Long back, at the present place of this temple, Lord Vinayaka had given his darshan to Lord Brahma, and also gave various boons to him. Since Lord Brahma who is also known as Ayan, visited this place, this place came to be known as Ayanpuram or Ayanavaram. In ancient times, this place was called as Brahmapuri, and I have been born and brought up in Ayanavaram.

During monthly Chathurthi and annual Chathurthi days, grand puja would be held in the temple, and during annual Vinayaka Chathurthi festival day, delicious Mothakams would be prepared by the temple priest in his home, and it would be offered to the devotees. The residents of Ayanavaram would visit this temple along with their families during Sundays, in order to get the glimpse of their dear elephant god Vinayaka. We can offer Arukampul and flowers to Vinayaka, and it would be adorned it to the Lord. It is believed that since, Lord Brahma itself visited this place, those who suffer from severe Brahmahathi Doshams would get relieved, once if they visit this lovely temple.

Whatever we do in our life, must be based on faith and bhakti. Hence, let us try to visit as much temples as possible during our life time, in order to get the grace of the almighty and also to reduce our bad karmas.