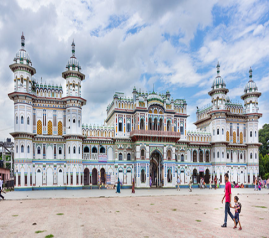 Janaki Mandir is a wonderful temple situated in Janakpur, Nepal, and it is dedicated to Ma Sita, the pious consort of Lord Rama. This temple is built both in Hindu and Islamic style, and it is rich in art and architecture. The temple is big in size, and it was built using marble stones, and it looks very beautiful. As per ancient legend, King Janak had ruled the Videha Kingdom during the Treta Yuga, which is known in the present day as Janakpur. It is also believed that the marriage ceremony of Sita and Rama took place nearby the present place of the Janaki Temple.

Though the temple is believed to have been existed before several hundreds of years in a small size, but Queen Vrisha Bhanu of Tikamgarh built the temple in the year 1910 AD in a big size.

During the 17th century AD, a beautiful golden statue of Ma Sita was found at the present place of the temple, and it is believed that once Ma Sita was born and brought up at this holy place. The golden statue was installed in a small temple of Ma Sita which was built by the 17th Century Saint and poet Sri Shurkishordas, and he also delivered nice lectures about Ma Sita amongst the people, and also established lot of proofs about the stay in Janakpur by Ma Sita during the Treta Yuga.

During the year 2015, due to earth quake, the temple was partially damaged. Every year, during Rama Navami and Sita Navami festival days, lot of pilgrims from Nepal, India and Sri Lanka, visit this marvellous Janaki Mata Temple in order to worship Lord Ram and Sita.

Ma Janaki, is also called by various names such as Sita, Boomija, Rampatni and Vaidehi. Being born as the daughter of Ma Bhudevi, throughout her life, she remained very calm and contains soft nature. She suffered a lot in her life, and yet, she remained as a devotee and a dutiful wife of Lord Rama. Whenever we try to control the anger of an angry woman, we used to tell, observe patience like Sita Mata, since Sita Ma can be considered as the goddess of patience, which she had learned it from her divine mother, Ma Bhudevi.

Since this wonderful temple of Ma Janaki is located in Nepal, if we find it difficult to visit it, at least we can watch some YouTube videos of this marvellous temple, in order to show our respect to the holy mother, Ma Sita.