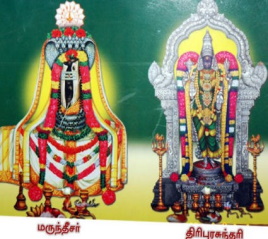 Marundeeswarar Temple is a temple dedicated to Lord Shiva, situated in Thiruvanmiyur, Chennai. It is one of the Paadal Petra Sthalams and the great nayanar saints Appar and Tirugnana Sambandar have sung about the importance of this temple. The temple has been reconstructed and renovated by the Chola kings during the 11th century.  The Marundeeswarar temple is considered as a place of worship for the people with dreaded diseases, and many people have shared their experiences about the holiness of the temple, and their relief from various diseases after visiting this temple.

The temple follows six daily rituals from 5:30 a.m. to 10 p.m. and twelve yearly festivals. The latest consecration of the temple was performed during the year 2008.

It is said that sage Valmiki, worshiped Lord Shiva in the temple. Hence this place was called as Thiruvalmikiyur, which in due course pronounced as Thiruvanmiyur. There is also a small shrine for the great sage “VALMIKI” near the temple. It is believed that Markandeyar, Lord Brahma and the divine wish fulfilling cow “Mata Kamadhenu” worshipped Lord Shiva in this temple.

The main deities of this temple are Lord Marundeeswarar and Thirupura Sundari Amman. The temple also has smaller shrines for Ganesha and Murugan. The samadhi of Pamban Swamigal is also found near the temple. Daily free food is offered to more than 100 devotees in this temple by the temple management.

By visiting the temple and worshipping Lord Marundeeswarar and Thirupura Sundari amman, we would get the following benefits in our life:

By worshipping Lord Shiva, we would get the above benefits in our life, and apart from that,   we will get salvation also. Hence let us visit this temple at least once in a month and be blessed.