In: Bhakti, Temples
With: 0 Comments 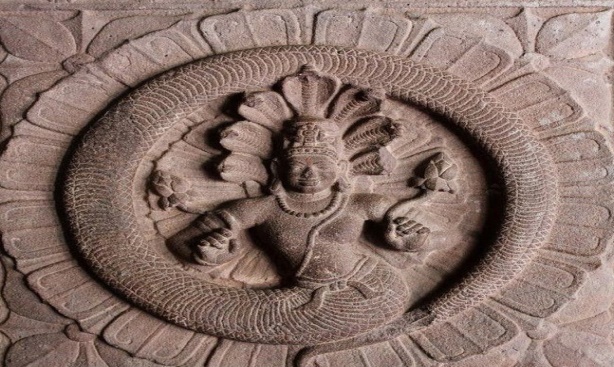 INTRODUCTION
Nagas are mentioned in Hinduism, Buddhism and Jainism texts and they are considered as divine deities and reside in the Patala Loka. They contain great powers, and can take any form at any time. They are also related with gods and goddess like Nagathamman, Nagalingeswarar and Ananta Padmanabha swamy etc. Among the Nagas, Adisesha had become a divine serpent bed of Lord Vishnu, and Vasuki had become the ornament and was adorned by Lord Shiva in his neck, and Lord Vinayaka also used to wear a divine naga as an ornament in his stomach.
Mata Manasa Devi, the Snake goddess and the healer of several dreaded diseases is worshipped by the people all over the world, and lot of temples are dedicated to her throughout India, and she is considered as the mother goddess. Similar to that, Takshaka and Karkotaka are the holiest snakes and lives in the nether world, and they give us all kinds of prosperities and relieve us from diseases and problems.
According to legend, lot of divine gods and demi gods were visited the Naga Kingdom and admired the beauty of the Loka. Naga Lok can be compared equivalent to Indra Lok and contains all the riches. Serpent people, who lives in the Naga Kingdom contains a shining look, healthy body and lives for a long period of time. Those who visit Naga Lok would be welcomed by the Nagini’s, the female forms of Nagas in a pleasant manner. They contain beautiful face, and wear all kinds of precious ornaments, and glitters like a sun.
Once, the great Vishnu Devotee Sri Bhakt Prahalad had visited the Patala Loka, and he was welcomed in a grand manner by the Naga kings and queens. He was given precious gifts and ornaments, and Nagas were praised his glory and his greatness. Bhakt Prahalad was a noble king, and he has controlled his senses, and didn’t enjoy any luxuries and pleasures. His entire attention is only on devoting Lord Vishnu and praising his glories, and due to that, he didn’t accepted the gifts given by them, and after staying for some time in the Naga Loka, he went back to his kingdom.
Let us worship the great Nagas and be blessed.
“OM SRI SESHA BHAGAWANE NAMAHA”
“OM NAMO NARAYANAYA NAMAHA”
“JAI SRI BHAKT PRAHALAD”
WRITTEN BY
R.HARISHANKAR