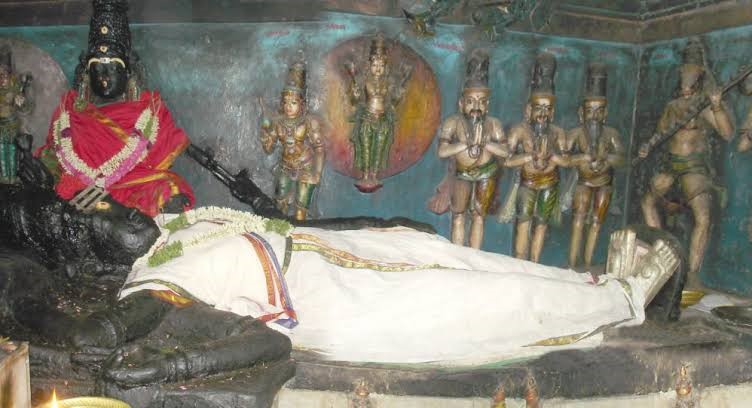 Pallikondeswara Temple is a famous temple dedicated to Lord Shiva and it is situated in Surutapalli, a village in Chittoor district of Andhra Pradesh. The main deity Pallikondeswara, unlike in other Siva Temples, will be in the form of resting posture, and such a kind of form is not found anywhere else.

Palli Kondeswarar is found along with Mata Parvati who is called as Sarva Mangalambika, who gives all kinds of prosperity to us. The temple was built by the Vijayanagara kings. Here Lord Shiva is not worshipped in the form of Lingam. The divine idols of Ganesha, Muruga, Surya, Chandra, Indra, Brahma, Vishnu, Kubera, Adisankara and Rishis are also found in the temple. Navagraha shrine is also separately present in this temple. The Pradosha kala puja is performed here in a well versed manner.

As per the puranas, during the churning of the divine ocean by the gods and demons, along with various things, the poison Halahala also found in the ocean, which Lord Shiva had drank it, in order to safeguard the entire universe from destruction. While on his way to Mount Kailash, he was not well and for some time he took rest in the place of Suruttapalli.  In order to honour the great god, who has protected the entire universe through his divine grace, a temple was constructed at this place.

Pradosham and Sivarathiri festivals are considered as most auspicious festivals in this temple. During these days, thousands of devotees would throng in the temple and will get the darshan of their beloved god and goddess, and get relieved from their sins and also from their various problems.

Let us try to visit this holy and rare temple of Lord Shiva at least once in a year, and get his great blessings.