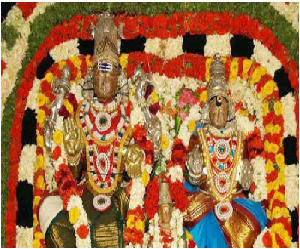 Palliyarai is similar to the main shrine of the deities of the Hindu temples, with regard to its sanctity. It is the resting place of the deities, and the place is considered as very sacred by the Hindus. In most of the Hindu temples, after the last puja, during the night, the Urchava idol of the goddess would be placed nearby her divine consort, in a separate room called as Palliyarai, and this would normally happens after 9 PM in most of the temples. This Palliyarai puja is very famous in Meenakshi temple in Madurai and in Chidambaram Natarajar Temple.

This function attracts lot of Devotees every day, and a procession would be performed, and at that time, the deities would be carried by the devotees with their shoulders and they would circumambulate the temple with full of joyfulness in their mind. The next day, after the gates of the deities are opened, it is called as “Thirupalliezhuchi“, it means making the divine deities to wake up in the morning, by singing divine songs, and also by performing puja to the deities.This Thirupalliezhichi is celebrated grandly in Lord Vishnu temples like Srirangam and Tirupathi. In some of the temples, a mirror would be kept at the back side of the deities.

God has created us and makes us to do our duty on our own, and also gives good physical and mental power, and guides us in our everyday life. God acts similar to our father and mother. Hence in order to show our love and affection on them, we are visiting the temples, performing pujas and abhishekhams and chanting the divine mantras. Similar to giving a comfortable room for our parents, we are keeping the divine deities in a separate room, in order to make them to take rest. This system is in practice for several centuries, and we can know about it in detail, by reading the songs sung by the Alwars in the holy text “DIVYAPRABANDHAM”.