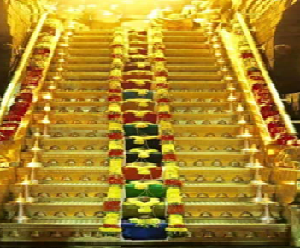 Pathinettampadi are the 18 divine steps of the popular Sabarimala temple which is situated at Kerala. These steps were previously made out of precious granite stones, and in the year 1985, it was coated with metals like gold and silver. Sabarimala pilgrims must climb up on these holy steps, by carrying the ‘irumudi’ and after observing the fast of 41 days. Those who visited Sabarimala for 18 times would be known as ‘Guruswami’.

By climbing these 18 steps, we would be                     relieved from our bad habits like anger, attachment, pride, desire and jealously and we would get good knowledge, wisdom, courage and boldness in our life. One who climbs these 18 steps would become pious and holy and become one of the beloved devotees of Lord Ayyappa.

The Padi puja is a type of puja performed by the priest and the chief priest to the eighteen hill demi gods who protects Lord Ayyappa. At the time of performing Padi puja, the eighteen steps would be decorated with beautiful flowers and lamps would be lighted.

Similar to the 18 steps of Lord Ayyappa, The puranas written by Veda Vyasa are also eighteen in number, the Kurukshethra war  continued for eighteen days, the Bhagavad Gita has eighteen chapters, and the main Siddhars are eighteen in number.

Lord Ayyappa is also called as ‘Kaliyuga Varadha’, which means one who safeguards us during this worst Kali Yuga. In this Yuga, day by day, we are facing lot of problems in our life like problems from ill health, poverty, unemployment, family tensions and office tensions etc.

Hence let us plan to visit the holy Sabarimala, walk into the 18 steps, and be blessed.