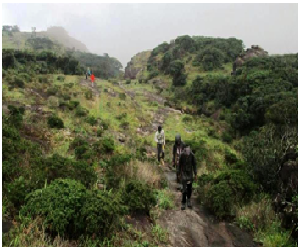 The Pothigai Hills also called as Agasthiyar Mountain, is a famous mountain, and the height of the hill is more than 6000 feet, and this sacred mountain is situated in the border of Kerala and Tamil Nadu. This is the favourite mountain of Rishi Agasthiyar, and he had meditated in this mountain for several thousands of years, and it is believed that still he used to frequently visit this holy mountain.

As per legend, during the time of Lord Shiva’s marriage, most of the people went to the holy Himalayas, to witness the divine couple marriage. Unable to bear the weight of the human population, Ma Bhumi Devi prayed to Lord Shiva in order to reduce her burden, due to that Lord Shiva felt pity on her, and hence he told to Agastya to go towards South India. As per the instructions of Lord Shiva, Rishi Agastya went to the Pothigai hills and through his supreme powers he reduced the burden of Ma Bhudevi.

This mountain contains full of medicinal herbs which are used for preparing the Ayurveda and Siddha medicines. We can also find lot of animals like elephants, bears and tigers which would freely roam in the holy mountain without disturbing us.

In this mountain, some kind of tribal people are living and their main occupation is hunting of small animals, collecting wood from the forests and selling of inexpensive ornaments.

We can find lot of trees like jackfruit and mango, and holy trees like Vilva, Arasa and Vanni are also available.

The Pothigai Mountain is mentioned in ancient Tamil Texts, and also in our holy Puranas, and it is believed that once Lord Muruga had given his divine vision to sage Agastya, and he also taught Tamil Language to him, and gave his divine blessings, and as a result he attained enlightenment. The famous Nayanmar saint Sri Sundarar had praised this divine mountain Pothigai in the famous Shaivite text “Thevaram”.

A temple for Rishi Agastya can be found on the banks of the Thamirabarani River. Sage Agastya used to give his divine appearance to his sincere devotees at this temple.

In order to visit this holy mountain, visitors must get an entry pass from the Trivandrum Forest Department or they can apply it through online also by paying the prescribed fees. But they would be allowed to visit only certain areas of the mountain only.

2021-02-02
Previous Post: Hindu shlokas to open Georgetown Council in Delaware for the 1st time in 230 years
Next Post: Angaraka