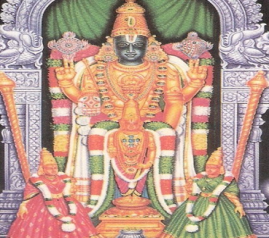 There is a famous temple dedicated for Lord Vishnu, and it is situated in Gunaseelam, which is located a few kilometres away from Trichy. Lord Vishnu in this temple is known as Prasanna Venkatachalapathy, and it is said, that due to the supreme powers of the Lord, several mental related diseases of the devotees are quickly healed even without taking medicines. It is supposed to keep the mentally sick people at the temple premises at least for a period of 48 days, also known as one Mandalam, in order to get speedy recovery from the illness.

During that period, the devotees have to faithfully consume the temple Prasad of Perumal, and they also should visit the shrine of the Lord regularly during their stay at this temple.

A mental rehabilitation centre is also opened by the temple authorities, and the mentally sick patients can avail the benefit of staying there either freely or at subsidised rates.

The temple follows six daily rituals and the temple timings are between 6:30 a.m. to 8:30 p.m., and important festivals like Vaikunta Ekadashi, Rama Navami and Krishna Jayanti are being celebrated at this temple. Apart from these festivals, the annual Brahmotsavam (Chief festival) is also celebrated in this temple, and it is attended by several thousands of devotees throughout Tamil Nadu.

The sacred place Gunaseelam is meant as curing place, and hence, based on that, every day, lot of people who suffer from mental illness are visiting this divine shrine, with the belief, that they would become normal after worshipping the Lord. It is also believed that Lord Vishnu hears the sufferings and cries of the devotees, and quickly relieves them from their diseases, and hence, he is also called as “DHANAVANTRI PERUMAL”.

As per ancient legend, once the great Gunaseela Rishi had got the divine vision of Lord Vishnu at the present place of the temple, and as per the request of the sage, Lord Vishnu had permanently stayed at this place, and a shrine is also constructed to him. Since Lord Vishnu had given darshan to Gunaseela Maharishi in the form of Lord Venkateswara, he is called as “Prasannna Venkatachalapathy”. And this incident was happened during the beginning of the Kali Yuga.

The Lord also promised to Gunaseela Rishi, that he would dwell at this temple till the end of the Kali Yuga, and would relieve the illness of the devotees. And as per his saying, he still heals the mental diseases of the devotees, and shows them a proper path in their life. This temple was glorified by the Chola Kings, and they have also renovated this ancient Gunaseelam temple for several times. Apart from the main shrines, shrines for Narasimha, Navaneetha Krishna, Varaha, Sridevi and Bhudevi are also found inside the temple complex.

At this present period, at any time, anything may happen to us, and most of us are already suffering from mental stress and tensions. Hence, as per the proverb, “PREVENTION IS BETTER THAN CURE”, by considering it as a precautionary step, let us once visit this temple, in order to get prevented from various mental diseases, which might occur in our future.