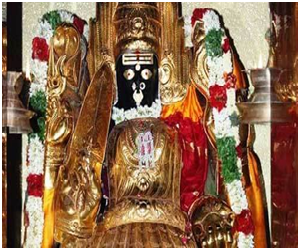 Punnai Nallur Mariamman temple is a famous Amman temple located at the outskirts of Thanjavur. Mariamman is a form of Mata Parvati Devi, who relieves the diseases of the devotees, especially diseases like small pox, measles and from deadly virus fevers.

Those who suffer from black magic problems and enemy related problems are getting solutions for their problems, after visiting the holy shrine of Punnainallur Mariamman.  The idol of Amman is very powerful, and by seeing the face of the Amman, we would get boldness, wisdom and courage. During the year 1680, when the then king of Maharashtra, Sri Venkoji Maharaja of Tanjore was travelling to Samayapuram, Amman appeared in his dream and asked him to trace an idol in a forest consisting of Punna trees, which is located a few kilometres away from Tanjore. The King immediately went to the spot and recovered the idol from the Forest. A temple was constructed at the place and the idol was installed, and since the place was covered with full of Punna trees, the Amman deity of this temple is known as Punnainallur Mariamman. It is believed that the daughter of the then Tanjore king (1729–35) lost her eyesight in an illness, had regained her eye sight after offering worship at this temple.

Initially, the Amman was worshipped in the form of white-ant hill. Later, the Great saint, Sri Sadhasiva Brahmendra swamy had converted the ant hill into Mariamman Temple and also installed a powerful Sri Chakra Yantra.

This temple is located in Punnai Nallur, situated nearby Thanjavur old Bus stand. Lot of Bus facilities and autos are available from Thanjavur to Punnai Nallur. During the year 2012, while I was staying in Thanjavur, I have visited this famous temple of Mariamman, and had nice darshan of the holy mother. From then onwards, I am able to lead my life in a comfortable manner, without much problems in my life.