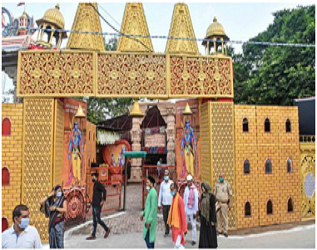 Ram Janmabhoomi is the Holy place, which is believed to be the birth place of Lord Rama, an avatar of Lord Vishnu.  As per the great epic Ramayana, Rama’s birthplace is located on the banks of the Holy Sarayu River in the city of Ayodhya.

Few hundred years back, at the present place of Ram Janmabhoomi, a mosque, known as Babri Masjid, was constructed by a Muslim king. In order to establish Rama temple at the Ram Janmabhoomi, during the year 1992, Hindu activists demolished the mosque. Due to that, Hindu-Muslim clashes were took place, and after a long period of time, due to the grace of Lord Rama, today (05.08.2020), Bhoomi Puja for Rama temple had taken place at the place of the Ram Janmabhoomi, and the construction work will go on in full swing, and a big temple for Lord Rama can be seen after 3 to 4 years period.

Important personalities like our Prime Minister Narendra Modiji, and Sri Aditayanathji, Chief Minister of Uttar Pradesh, have participated in the Bhumi Pujan festival.

Hindus celebrated the Bhumi Pujan from all parts of the world, with much happiness, and they have continuously chanted the Rama Mantra, “JAI SRIRAM”. Most of the Hindus have celebrated the Bhumi Pujan as a grand festival, and most of the elderly Hindu people read the Ramayan Book, and chanted the glorious names of Lord Rama, and performed puja for Lord Ram at their homes.

Shri Ram Janmabhoomi Teerth Kshetra is a trust which is founded for the construction and administering of Shri Ram temple in Ayodhya, Uttar Pradesh.

Construction of Rama Temple at his birth place is a good task, since by doing that, the Ram devotees, wishes are getting fulfilled and they can get the darshan of their beloved god Rama.

Out of the incarnations of Lord Vishnu, Rama’s incarnation is very popular. He lived like an ordinary man, and utilized his powers, only in times of need. He acts as an example for others, and lived a noble life throughout in his life. During the period of Rama, all the people in his kingdom were lived happily and peacefully, and they didn’t suffer from problems and from diseases. All of them lived a long life, and paid great respects to their King Rama. It is believed, that after the end of his life, Lord Rama, had taken the Ayodhya people to the Vaikunta along with him.

Lord Hanuman is still chanting the Rama Mantra in the Himalayas, and due to the grace of Lord Rama, during the next Yuga, he would become the next Brahma, and would wonderfully do his creation work.

Let us chant the Rama Mantra and be blessed.