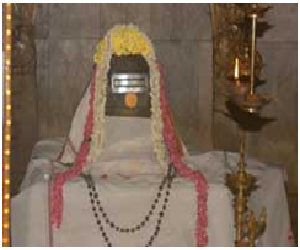 Once, the Sun god also took bath in the temple tank to get rid of his Bhramaharti Dosham. Mata Parvati Devi shrine is also available in this temple. It is believed that Sage Vyasa had got the divine darshan of Lord Shiva at the present location of this temple, and hence this place is known as Vyasarpadi.

The Sun god shrine is also located inside the temple. After worshiping lord Shiva, the Sun god must be worshipped. The temple has three sacred trees. Lot of people visit this temple on Sundays to get rid of various diseases and mental problems. The God is considered as powerful, and worshipped by hundreds of devotees during festival days. Those who suffer from eye related diseases are suggested to worship Lord Surya and Lord Shiva at this temple, in order to get rid from their diseases.

Here free food is offered daily to a minimum of 50 people. The place is easily accessible from various parts of the city through various modes of transport. By worshipping Lord Shiva and Lord Surya, we can get all kinds of prosperity in our life.