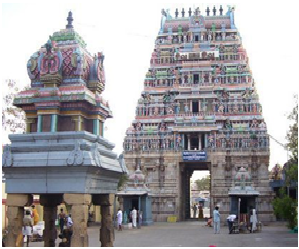 Sangameswarar temple is situated in Erode district, Tamil Nadu, and it is a famous temple of Lord Shiva, similar to Angalamman Temple situated at Keerakara Veedi, Erode. Lord Shiva in this temple is worshipped as Sangameswarar and Ma Parvati is worshipped as Vedanayaki Amman and she is also called as Sangameswari. This temple was located near the holy rivers Kaveri and Bhavani and it was praised in ancient Tamil texts. This temple is famous for relieving Pitru Doshams of the devotees.

Once on the advice of the divine voice from the sky, Lord Kubera, the god of wealth visited this temple, and performed puja and Abhishekham to the Shiva Lingam. Hence it is believed that those who visit and worship Lord Sangameswarar in this temple, would get good health, wealth and can attain all kinds of prosperity in their life. The temple tree is the holy Ilandhai tree and the fruits of the tree would be used for daily puja. During the year 1804, Ma Vedanayaki Amman came in the form of a small girl and saved the life of the then British Collector of Coimbatore. As a thanksgiving act, the collector had offered gold to Ma Sangameswari, and still now the gold was kept under safe custody in the temple.

Apart from the main shrine, shrines for Lord Muruga, Vishnu and Lakshmi are also found near the main shrine. The temple annual festival is celebrated in the Tamil month of Chitirai and Shiva Rathri and Thiruvathirai festival are also grandly celebrated in this temple. Devotees used to visit this temple, especially for getting relieved from their sins, diseases and mind related problems. This temple was visited by the Nayanmar saints, including the great Shaivite saint Sambandar. The great Saint and Muruga devotee Arunagirinathar had visited this temple and sung lot of bhakti songs on Lord Muruga.