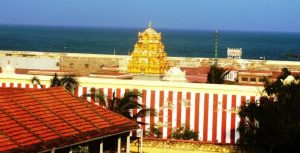 INTRODUCTION
Devi Kanya Kumari is goddess Parvati in the form of a girl child popularly known as Shakthi. The temple is dedicated to the goddess which is located in Kanya Kumari in Tamil Nadu. She is also known by several other names, including Kanya Devi and Devi Kumari. The goddess is believed to be the one who removes our mental and physical problems in our life. Kanyakumari Temple is one of the 52 Shakti Peethams.

History
Kanyakumari is situated in Tamilnadu. Kanya Kumari is a virgin goddess. Since Lord siva didn’t keep his promise to marry her on one particular day, she was angry, and her anger was diverted to kill the demons. She remained a virgin and did penance.
The story dates back to the prehistoric Tamil period. Bana an asura by birth was the ruler of his land. He was a very powerful king. He did penance and got a boon from Lord Brahma that his death will occur only by an adolescent virgin girl.
With this powerful boon, he became fearless and caused several problems to devas and he was finally destroyed by Goddess Kanyakumari Amman and the place where he was killed is now known as Kanyakumari.

Attractions of the Temple
The other attractions inside the temple are the Pathala Ganga Theertham, Kalabhairava Shrine. Kalabhairava is a ferocious form of Lord Shiva who annihilates everything,
Navarathri Mandapam is a hall where devotees can display their artistic ability in music as a dedication to the goddess. Shri pada paara, the rock in the shape of Devi’s foot. This is now famous as Vivekananda paara, where Vivekananda did penane in his place and got enlightenment.
Red Sarees and Ghee wick lamps are offered to the goddess by devotees.This temple has been considered as sacred by Hindus as it is the confluence of three seas. Offering Pitru Tarpan and bathing in the sea in the Kanyakumari beach is considered to be holy because of the convergence of many important Theerthams. There are a total of 11 theerthams associated with the temple in the ocean surrounding Kanyakumari.

Chitra Pournima Festival: Celebrated on the Full moon day in the month of May every year.

Navarathri festival: 9 day festival in (September–October). The music artists get opportunity to perform their artistic skill to the devi in the Navarathri Mandapam.

Vaisakha festival: 10-day festival in May–June During this festival, Devi will be taken in procession both in the morning and evening.

Kalabham festival: The idol is dipped in Sandal paste in the last Friday of the month of Karkidaka or Aadi, in July–August.

CONCLUSION
It can be concluded by saying that it is a must to visit this divine amman’s temple and to seek her blessings to live a healthy and happy life with peace of mind. Let us chant the nama of Devi Kanyakumari and be blessed.