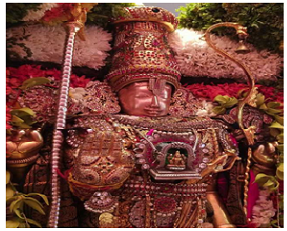 Sri Bakthavatsala Perumal temple is situated at Thirunindravur, at Chennai, near Avadi, and here Lord Vishnu is worshipped as the main deity. This temple was praised by the Alvars in the famous vaishnavite text, Nalayara Divya Prabandham, a collection of beautiful poems of Bhagavan Vishnu. By seeing the divine face of Vishnu, all of our tensions and troubles would fly away from us, and during the night time, we would get sweet dreams about the Lord. It is also one of the 108 Divyadesams, and here Vishnu is worshipped as Bhaktavatsala Perumal and Mata Lakshmi is worshipped as Ennai Petra Thayar. Many Alwars and Vaishnavite saints have visited this holy temple, and sung songs in praise of Lord Vishnu and Lakshmi.

The temple was built by the Pallava kings during 9th century AD, and it was                            subsequently renovated by the Karnataka kings. In this temple, Lord Vishnu had appeared before Lord Varuna, the ocean god, and Lord Kubera, the god of wealth, and blessed them. Daily pujas are performed at this temple, and every year, Krishna Jayanthi festival, is celebrated in a grand manner during August–September. Chithra Pournami and Navaratri festivals are also celebrated at this temple in a nice manner. Apart from the main shrines of Vishnu and Lakshmi, separate shrines for Andal and Vaishnavite saints are also found inside the temple. Nearby this temple, a beautiful Sri Rama Temple is also located.

Those who suffer from severe distress and from various doshams are advised to visit and worship Lord Bhaktavatsala in order to get immediate relief. Lord Bhaktavatsala takes more care and interest on his devotees, and would quickly heal the diseases of his devotees. Devotees can visit this holy temple during Saturdays and other festival days, in order to get the divine bliss of the great almighty.