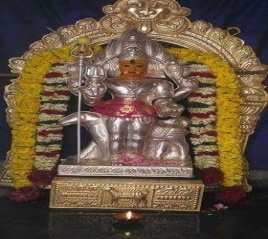 There is a famous temple dedicated to Lord Kalabhairava, an aspect of Lord Shiva, and it is situated in Morepalayam, Tiruchengodu Thaluk, Namakkal District, Tamil Nadu, 637205. This temple was constructed by the then ruler of Tiruchengodu, approximately before 300 years ago. Here Lord Bhairava can be seen in the main shrine of the temple, and this temple is also known as South Kasi Temple, for its significance. During Ashtami days, we can see large number of people in the temple premises, with the hope of getting their problems solved, through the grace of Lord Kalabhairava.

During 18th century AD, a king was ruling over the present day Namakkal District, and once, in his dream, Lord Kalabhairava had appeared, and ordered him to build a separate temple for him in his region. The king got very much excited, and immediately he began to undertake the task of building a wonderful temple for Lord Kalabhairava. Initially, the temple was built in small size. But after the passage of time, the rulers of Namakkal, began to extend this temple, and also introduced permanent puja schemes.

As per our Holy Hindu Puranas, Sri Sarameyan is considered as an immortal male dog who previously lived in the Swarka Loka, also called as Indra Loka, along with his mother Ma Sarama. Sarameyan was mentioned in the Rig Veda, he was also mentioned in the Mahabharata and also in some other Puranas, as a holy male dog, who contains a shining face, and he is an intelligent dog.

As per Hinduism, all the male dogs are considered as an incarnation of Lord Kala Bhairava, an aspect of Lord Shiva, and all the female dogs are considered as an incarnation of Ma Bhairavi, an aspect of Ma Shakti Devi. Sarameyan is considered as the friend of all the dogs living in the earth, and it is believed that he protects the dogs during the times of their difficulties and dangers. Once, the great king Janamejaya performed fire sacrifice. During that time, the great Sarameyan, went nearby the Yaga Sala, and he had wagged his tail. Janamejaya and others were disliked with the act of the dog, due to his presence at the Yaga Sala. Hence he and his attendants were beaten the dog with a stick, and drove it away from that place. As a result as per the advice given by his mother Ma Sarama, the young Sarameyan had performed severe penance on Lord Shiva, and became a pious vehicle to the Shiva avatar, Kala Bhairava.

From this incident, we should understand that dogs are holy animals, and at any cost, they should never be harmed by anyone. If anyone harms any dog, then it would be immediately noticed by the great Sarameyan, and he would curse them, and due to that, they would suffer from lot of problems in their lives.

Let us worship Lord Kalabhairava and his divine vehicle, Sri Sarameyan, and let us be blessed.