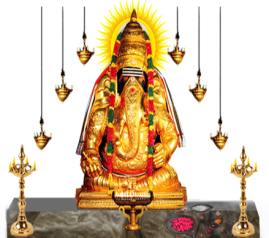 Karpaka Vinayaka Temple is an ancient temple dedicated for Lord Vinayaka, and it is situated in Pillayarpatti village in Tamil Nadu.

In this wonderful temple, we can find beautiful sculptures of Lord Shiva and Arthanareeswara, and this temple was built by an ancient king, in whose dream Lord Vinayaka had appeared and ordered him to build a temple for him. Since Lord Vinayaka grants various boons and fulfils the wishes of his devotees similar to the Kalpavriksha Tree, Lord Vinayaka in this temple is also called as Kalpavriksha Vinayaka.

This temple contains stone inscriptions depicting the images of various deities, which appears in a beautiful manner. The temple tower appears big in size, and it contains lot of Mandapams, and additionally it contains a large temple tank. The temple attracts lot of pilgrims, especially during the festivals like Annual Vinayaka Chaturthi and during monthly Chaturthi days. The Karpaka Vinayakar temple is located a few kilometres away from the Karaikudi. The temple is periodically renovated by the kings, and some more shrines were added by them during their period. This temple is the most favourite temple, especially for the Chettiar community people, and it is also maintained by the Chettiars.  During the year 2017, Kumbhabhishekham was performed at this temple in a grand manner.

As per legend, ancient businessmen from Chettiar community would visit this temple before doing any trading activity, and lot of marriages are also conducted at this temple, and hence in ancient times, the Vinayaka in this temple is also called as “KALYANA VINAYAKAR”. In ancient times, devotees would bring lot of Karpooram (camphor), in order lit before the idol of Lord Vinayaka, and due to that, this precious Vinayaka was also called by the ancient devotees as “KARPOORA VINAYAKA”. Those who suffer from Kanya Dosham, which might have occurred to them, due to the curse given by a woman, are suggested to visit this wonderful temple of Lord Vinayaka in order to get relieved from Kanya Dosham, Sarpa Dosham, Brahmahatti Dosham and also from all other doshams and problems in their lives.

Lord Vinayaka is showing great mercy on us, and though we might have committed sins in our past lives, by heartily praying to him, all of our troubles and turmoil would come to an end, and by worshipping him regularly, our bad karmas would be destroyed and good karmas would be added in our life account.

Hence let us pray Lord Vinayaka throughout our life and let us be blessed.