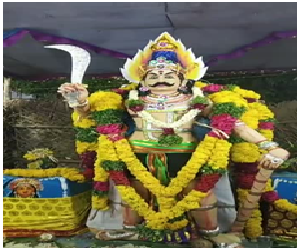 Sri Mahakala also called as Mahakalar, is one of the Divine Attendants of Lord Shiva. He is considered as an AMSHA of Sri Dharma Shasta, who had later incarnated as Swamy Ayyappan, a famous deity in Kerala. There is a famous temple for Mahakala which is situated in Maraneri, Tamil Nadu 613102. In this temple, along with Mahakalar, Lord Karuppanna Swamy, Lord Madurai Veeran Swamy and Ma Kali Devi’s shrines are also present there. Mahakalar is also worshipped by the people as their Kula Deva as well as their Ishta Deva. Every Sunday, local devotees used to cook Pongal and Kuzh and offer it to the deities as Holy Prasad. After the performance of puja, the Prasad items would be offered to the devotees. Mahakalar is one of the powerful guardian deities, and he is also worshipped as an aspect of Lord Shiva.

Before becoming the divine attendant of Shiva, Mahakala lived his life by hunting the animals in the forest. He was a sincere devotee of Lord Shiva, and similar to Sri Kannappa Nayanar, he also used to fill up his mouth with full of water, and he would pour it in a Shiva Lingam, located inside a Shiva Temple. He has done his job as a daily practice, and though he didn’t observed cleanliness while doing the abhishekham, Lord Shiva had accepted his devotion, and after his death, he had made him as one of the Shiva Ganas in Mount Kailash, and from then onwards, Mahakala had gained popularity similar to Lord Nandikeswarar, who is the Divine Vehicle and the divine gate keeper of Kailash.

Mahakala is worshipped all over India, and he is worshipped as a guardian deity in villages. In Kerala, along with Lord Dharma Shasta, Mahakala is also worshipped. He is the best protector for the ladies, and whenever ladies walk alone in remote areas, he would guard them, and would act as their own father. We must have to chant the mantra, “OM SRI MAHAKALA DHARMA SHASTAVE NAMAHA”, in order to chase away the evil spirits from our homes, and also to gain more spiritual energy.

Sri Mahakala is mentioned in ancient Puranas, and he protected Ma Indrani from Ajamuki, the sister of the demon king Surapadman, by hitting her on her body. Now, Mahakala is worshipped as an independent guardian deity, and it is believed that he has come down to the earth from Kailash, in order to protect the people in the earth, from their troubles and turmoil. People like political personalities, police personnel and big business people are advised to worship Lord Mahakala, in order to protect them from their enemies, and also to lead a happy and a peaceful life.