Temples in the forests 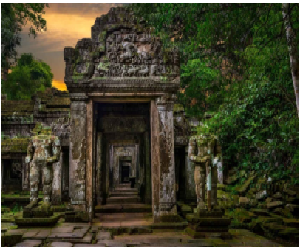 TEMPLES IN THE FORESTS

Still now lot of temples are there in thick dense forests. Some ancient Shiva and Kalabhairava temples are situated in forests and some of them are in a dilapidated state, and urgent action must be taken by the devotees and the philanthropists in order to repair and renovate such holy temples.

The Mahadeva temple in Goa was built before 800 years, and it is located in forest, surrounded by full of natural greenery, and nearby the temple there are no houses or shops. During the previous Dwapara Yuga, the holy pandavas had constructed lot of Shiva temples in North India, and most of the temples are situated in the forests. Annapurneswari Temple situated in Horanadu is also located in Forest, and still now lot of devotees from faraway places are visiting this holy temple, and in this temple, free food is provided three times a day, in a pleasing manner, through the grace of the Divine mother, Ma Annapurna, and along with that, coffee/tea is served for two times a day. Free lodging facility is also available inside the temple premises.

Ancient kings and saints thoughts were about the great almighty only. Their each and every cell would sing in praise of Lord Shiva and Vishnu, and due to that, they had the divine vision of the god directly, as well as during their sleep. As per the instructions given by the almighty, they have built lot of temples, and some of the temples were built in forests also.

A forest is a wonderful place, in which lot of trees and natural beauty would be there. It would be filled up with all types of animals and birds, and that’s why our ancient saints and sages have chosen forests as their homes. Living in the forests had given great mental satisfaction to the sages, and that’s why they were able to perform meditation on the almighty for a long period of time, and due to that, they were able to reach the divine worlds.