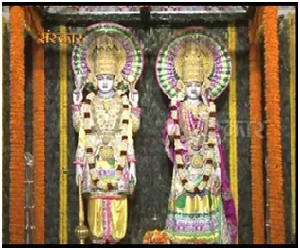 The Laxminarayana Temple, also called as Birla Mandir is situated in Delhi, India. Laxminarayan is a form of Lord Vishnu, and he is the protector of the entire universe, who dwells in this temple along with his consort Ma Lakshmi. This temple was constructed by the big businessman Birla, and few more shrines for the deities are found in this temple for Shiva, Krishna, Durga, Vinayaka, Hanuman and Buddha.

This is considered as the biggest temple in Delhi. This temple contains beautiful garden, nice sculptures, and a separate hall is built for doing meditation and for conducting Bhagavat Gita discourses. The temple is also considered as a main tourist spot and it attracts large number of devotees on Krishna Jayanti and Diwali. Mahatma Gandhi participated in the temple pujas after the completion of the temple in 1939. In this temple, all classes of devotees are allowed without any discrimination with regard to their caste, creed and community.

The art and architecture of the temple is praised even by the foreigners and the temple is getting worldwide recognition due to its sanctity and beauty. The temple is located in the main place of New Delhi, and nearby this temple lot of transportation facilities like buses and autos are available. Lot of good hotels with boarding and lodging facilities are situated within a few kilometres away from this holy temple.

Temple worship is the main thing which each and every Hindu must practice from their young age onwards. By doing that, they would get good withstanding powers in their future and also they would be able to meet any challenges in their life. God dwells in our heart itself, and he dwells in small as well as in big temples.