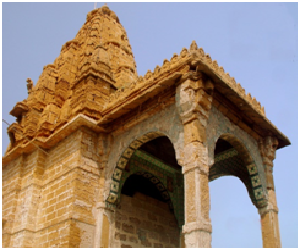 There is a Varuna Bhagavan temple located at Serayampalayam Road, Neelambur, Coimbatore, Tamil Nadu 641062. This is one of the very few temples dedicated to the great ocean god Lord Varuna. This temple is believed to have been built during the 20th century AD, and it was built when the people located in this area, faced severe drought and suffered from famine. Though this is a small temple, devotees would gather in large numbers on Sundays, and on festival days.

Varuna Bhagavan is considered as an aspect of Lord Vishnu. Hence by worshipping him, we would get relieved from our all types of problems, and we would get a blessed life. Lord Varuna had incarnated as the great Sindhi Saint Sri Jhulelal Maharaj, during the 10th century AD, in order to maintain peace and prosperity in this world. There is a shrine in the Tiruvannamalai Girivalam path, known as Varuna Lingam Shrine, and in this shrine Lord Varuna had installed a Shiva Lingam and prayed to him, before several thousands of years. Lord Varuna is the god of ocean, and through his supreme powers, he is controlling the Holy river mother goddesses such as Ganga, Yamuna, Godavari and Narmada. By worshipping him, we would get the grace of the Holy river goddesses also. In ancient days, fishermen would worship Lord Varuna, before going for fishing, and they consider Lord Varuna as their beloved god, and would perform daily puja to him.

Varuna Bhagavan also controls our senses, makes us to think in a positive manner, erase bad thoughts in our mind and would inculcate the bhakti in our mind. We can worship him by placing his picture in our puja room, and can chant his powerful mantra: “OM SRI SAMUTHRA RAJANE VARUNA BHAGAVANE NAMAHA”