The ardh, purna, maha and kumbh

The largest congregation of humanity at a single place to offer worship and rituals is the Kumbh Mela held on the banks of various rivers. Rivers have always had a deep significance and apart from being waterways providing a lifeline to communities, they have been revered as deities in Hinduism. River goddesses are offered worship and many events take place on the banks of the sacred rivers. Taking a bath in these sacred rivers, be it the Ganges or Yamuna or Kaveri is supposed to confer not just physical purity but also mental and spiritual purification. For those unable to take a bath in the rivers, chanting the following verse confers almost the same benefits. 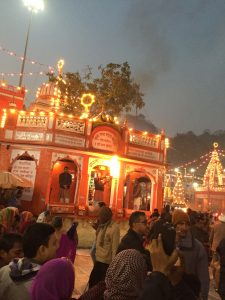 Invoking the presence of these Rivers that is Ganga, Yamuna, Godavari Saraswati, Narmada Sindhu and Kaveri in these very waters, I take the customary bath is the meaning of this verse.

Thus, we find the sacred rivers are accorded a divine status in Hindu Scriptures. The Kumbh Mela which occurs once in 12 years is the largest gathering of devotees to take a sacred bath in these holy rivers. The Kumbh meaning pitcher and mela referring to a fair is held in Haridwar on the banks of the River Ganga, Ujjain by the River Shipra, Nasik by the River Godavari and Allahabad or Prayag at the confluence of the Rivers Ganga, Yamuna and Saraswathi. Kumbh also refers to the sun sign Aquarius.

Scriptural references provide a glimpse of the importance of this Festival. Unlike other festivals like Diwali or Holi, the Kumbh Mela is celebrated based on planetary alignment and calculations. The origin of the Kumbh mela can be traced to the Samudra Manthan or Churning of the Great Ocean. The constant battle between the gods and the demons was taking a toll on the health and general well-being of the gods. The nectar of immortality that could be got from the great ocean was the only panacea to infuse lost vigor. But it was a task that could not be accomplished by the gods alone. They needed the strength of the demons to churn the ocean. The demons agreed but just when the sacred pot of amrit appeared the demons snatched it and fled to the skies. A fierce battle ensued, with the devas in hot pursuit of the demons. The sky became the scene of a bitter battle field. For twelve days the fight continued before the devas could emerge victorious. But in the process a few drops of the elixir, the divine amrit fell on four places on the earth. These are the holy rivers where the kumbh mela is celebrated once in twelve years for twelve days in the heavens would correspond to twelve earth years. The planetary alignment which occurred during this period of the great battle repeats itself and on these occasions these fairs commemorating the ancient event takes place.

Chandra the Moon, Surya the Sun and Guru or Jupiter aligned themselves and protected the amritkumbh or pot of nectar during the celestial battle. The time of the kumbh mela is therefore decided when this specific alignment occurs in the Zodiac. Thus, the dates and the place of the kumbh mela are decided based on this calculation by the learned scholars. The Purna Kumbh Mela or the Full Kumbh Mela is the most auspicious fair and  is held once in 12 years at one particular place only that is in Allahabad also known as Prayag. But the greatest of them all is the Maha Kumbh Mela or the Great Kumbh Mela which takes place after 12 cycles of Purna Kumbh that is once in 144 years at Allahabad. The Kumbh Mela itself occurs once in 12 years at a particular site but in actuality, there are 4 different kumbh melas which take place on rotation at different cities namely Allahabad (Prayag), Haridwar, Ujjain and Nashik. And then there is the Ardh Kumbh which takes place once in 6 years in between a Purna Kumbh. Ardh meaning half in Hindi conveys the meaning of the event succinctly. This is held at the half way mark at Haridwar and Prayag (Allahabad). Ardha Kumbh Mela takes place when the planet Jupiter enters Aquarius and Sun enters Aries. It is an amazing spectacle when the sadhus, mendicants, commoners and religious heads of various akhadas along with their disciples come to the fair. Religious discourses, bhajans, kirtans, food camps all these are held continuously making the atmosphere electric with spiritual vibrations. The naga sadhus and other mendicants remain hidden from human contact high up in the caves and mountains but this is one time when they would come and offer darshan to the devotees. It is a matter of faith and Hindus consider it as their great good fortune if they are able to take a holy dip during this period. The dates for the shahi snan or holy dip are well publicized in advance so devotees from far and wide can make arrangements well in advance to visit the fair. A dip in the river can wash away the sins and devotees can start their account afresh is the widespread belief. The cosmic energy that pervades the waters during this time can bring about an inner churning and can cause a person to turn his life towards spiritual pursuits.

There are references to the Kumbh Mela in our Scriptures notably in the Brahma Puran and Vishnu Puran. The Varaha and Matsya Puranas also mention the event. It is believed that Lord Brahma himself performed a yagna at the holy Sangam. The earliest written evidence of the event can be found in the accounts of the Chinese traveler, Hiuen Tsang who visited India during the reign of King Harshavardhan in 629-645 CE.

It is indeed a remarkable event which attracts hordes of tourists not just Hindus from all over the world to witness this amazing act of faith. After visiting the Kumbh Mela of 1895, the great writer Mark Twain wrote:

It is wonderful, the power of a faith like that, that can make multitudes upon multitudes of the old and weak and the young and frail enter without hesitation or complaint upon such incredible journeys and endure the resultant miseries without repining. It is done in love, or it is done in fear; I do not know which it is. No matter what the impulse is, the act born of it is beyond imagination, marvelous to our kind of people, the cold whites.