Built during the Chola rule, the Great Living Chola Temples got their name as these temples are living structures of devotion where worship at the temples has been going on uninterrupted for more than thousand years based on the agamas or manuals of temple worship. These live temples attract devotees and visitors from all parts of the world as they are symbols of the imperial power of the Chola Empire and also serve as a brilliant reminder of the supreme devotion of the powerful Chola kings.

The great living Chola Temples include three temples constructed during the eleventh and twelfth centuries. These are

All the three are epitomes of Dravidian architecture with their pyramidal towers. The powerful kings of the Chola dynasty ruled for over four and a half centuries with their capital as Thanjavur. Their rule is famous in history for their powerful conquests, their patronage of fine arts and literature, their sea voyages, their military prowess and the development of art and architecture. The Chola reign was a glorious era in Tamil culture and history.

The Brihadisvara Temple was designated as a protected UNESCO monument in 1987 while the other two temples at Gangaikonda Chola Puram and Darasuram made it to the list in 2004. The Temple at Thanjavur hailed as Dakshina Meru was consecrated by King Rajaraja Chola 1 in his 19th regal year possibly in 1003-1004 CE and inaugurated in his 25th regal year possibly in 1009-1010 CE. The amazing inscriptions on the temple walls serve as a detailed diary of his achievements. The temple is known as the big temple or Periya Kovil in Tamil. The Chola kings were great devotees of Shiva and built several Shiva temples all over their kingdom and Shaivism spread in all the corners of the kingdom during their reign. They were known for their munificence and charity and channelized the wealth from their conquests towards many civic projects. Rajaraja Chola’s son Rajendra Chola surpassed his father in valour and conducted all his military campaigns. By the time he was seventeen had expanded his kingdom throughout the Indian Ocean. To commemorate his victories, he built a new capital city at Gangai Konda Cholapuram. The entire town was neatly planned and well laid out. The Royal palace and the magnificent Shiva Temple matched the ones in Thanjavur but the rise of the new city meant a decline in the fortunes of Thanjavur. 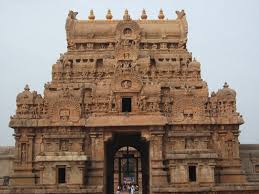 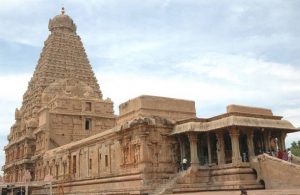 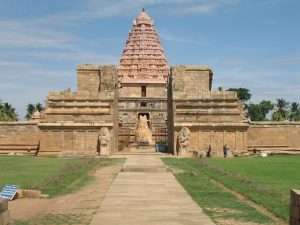 Aptly described as the greatest Architectural Wonder of India, the Brihadisvara Temple was named as Rajarajesvaram and Peruvudaiyar by the sailor king Rajaraja Chola himself. The temple is an architectural wonder and is built entirely of granite.  It is hailed as a ‘landmark in the evolution of building art in south India’ and its vimana is a ‘touchstone of Indian architecture as a whole’. What strikes a visitor is its use of space and spatial design. Broad expanse of space aids a devotee to enter into a trance like state as he beholds the amazing architecture and imbibes the energy pulsating in the sacred environs of the temple. The inner prakara is 240.9 m long (east-west) and 122 m broad (north-south), with a gopura at the east and three other ordinary torana entrances one at each lateral sides and the third at rear. The prakara is surrounded by a double-storeyed malika with parivaralayas. The sheer simplicity of the design is matchless and contrasts beautifully with the massive proportions of the temple. No wonder it is acknowledged as an architectural marvel, a sheer poetry in stone bringing out the unsurpassed skill of the countless artisans who worked on the structure for several years.  As per the inscriptions found in the temple, the Brihadisvara Temple was built by the Chola King Rajaraja-I in Thanjavur, the capital of the Chola kingdom and was completed in 1010 A.D. Later a copper pot was added onto the tower of the temple by Rajaraja Chola-II. Even the Pandyas, the Nayaks and the Marathas have added value to the temple. Built in accordance to the Makuda Agama Sastra, the Brihadisvara Temple’s chief architect was Veera Chola Kunjara Mallan, who was also known as Rajaraja Perunthatchan. The Keralaanthagan Gopuram was built by Rajaraja Chola after his triumph over Baskararavivarma, the King of Kerala. This gopuram essentially symbolizes the concept of the omnipresence of God.

Spread across an area of 750 feet by 400 feet, the Brihadisvara Temple is encircled by a moat and the area enclosed by it is also known as the Sivaganga Little Fort. The temple complex consists of the Garbhagriha, Ardhamandapa, Mahamandapa and the Mukhamandapa. The complex also hosts the Prakara, Outer Prakara and the Adhisthana. The three gateways or Gopurams of the temple are Rajarajan-Tiruvasal, Keralantakan Tiruvasan and the Outer Gopuram. With a pyramidical structure and a height of 60.96 meters, the Srivimanam is visible from the open courtyard of the Rajarajan Gopuram. The structure of the Temple is thirteen-storeyed. The primary features of the main shrine of the Brihadeeswarar Temple are as follows:

·         Garbhagriha or the sanctum sanctorum- The inner part of this area is also known as Karuvarai, literally meaning the womb chamber. The Garbhagriha is essentially square shaped.

The Kumbam, which is a single stone block is about 25 feet high and weighs about 80 tonnes. Lofted onto the main gopuram it is one of the most attractive features of the temple. The total height of the temple tower is 66 meters (216 feet) thus making it one of the tallest temples in the World. The skill of the workmen who hoisted it high above to sit on the spire without the aid of modern tools is simply mind boggling.

Lord Shiva, the principal deity of the temple is known as Brihadisvara or the Lord of the Universe. It was the Maratha Kings who named the deity as Brihadisvara. Other major deities worshipped in the temple Lord Vishnu, Goddess Durga, Lord Ganesha, Bhudevi, Nataraja, Kalantaka,  Sridevi,  Bhikshatana,  Virabhadra, Goddess Lakshmi,   Narasimha, Varaha, Mahishasuramardini, Bhairava, Ardhanarisvara,   Gangadhara, Harihara, Virabhadra and Vrishabavahana. The inscriptions on the walls of the Brihadeeswarar Temple serve as a diary of the major events recorded during the rule of Rajaraja Chola. It gives us a picture of the opulence and the flourishing economy of the period. Accounts were kept meticulously with all the income and expenditure met by the temple inscribed on the walls. Adoration of the mother goddess was well established as there are references to Devi and her worship. A giant Nandi carved out of a single stone stands 16 feet long and 13 feet high at the entrance.

The construction of the Brihadeeswarar Temple at Thanjavur by King Rajaraja Chola-I marked the advent of the Bhakti culture in southern India. The temple was at the epicentre of the Adavallan (Nataraja) worship of the Cholas. It is also a centrepiece of Dravidian architecture and served as a centre for dance and music in the society and therefore in the year 2010 a huge cultural event was organized in the temple premises to recall the initial golden years of the temple. Owing to the immense cultural and universal significance of the temple, UNESCO had enlisted it to be one of the World Heritage Sites.

The temple is in Thanjavur which is about 330 km from Chennai and is well connected by rail and road.

This temple dedicated to Lord Shiva was built by Rajendra Chola 1, son of Rajaraja Chola. It was completed in 1035. It stands second only to the magnificent Thanjavur temple. While the temple at Thanjavur has straight towers, here one can observe the graceful upward curving of the tower structure. It is from this ancient town that Rajendra Chola controlled his growing empire that stretched from the Tungabhadra in the North to Ceylon in the South. It is interesting to know how the place got its name. The King went on an expedition along the Ganga coast and brought many kingdoms under his control. The victorious army brought back Ganges water in golden vessels. Commemorating the victory the title Gangaikonda cholan was conferred on the king and the Shiva temple at Gangaikonda cholapuram was built. The beautiful temple with its exquisite gopuram has been described as the feminine counterpart of its massive counterpart at Thanjavur. It rises to a height of 160 feet. The vimana is flanked by small shrines dedicated to Durga, Nandi, Chandikeshvara on its sides. Fine sculptures with intricate detailing indicate the mastery of the artisans. There are metal icons in bronze of bhogasakthi and Lord Subramanya. Sun worship must have also been popular in the kingdom as there is a sourapitha or sun altar with eight deities in the temple.

The temple is in Perambalur district and is about 250 km from Chennai on the road to Kumbakonam and is connected well by rail and road.

The legendary white elephant of Lord Indra known as Airavata offered worship to Lord Shiva here. The lord of death, Yama also worshipped the Shiva linga in this place to get freed from a rishi’s curse. He is believed to have got rid of a burning sensation in his body after a dip in the holy tank in the temple. The tank came to be called as Yama Theertham from then on.  The tank 228 feet wide gets its supply of fresh water from the River Kaveri. The temple is a treasure trove of architectural delight. The temple was built by Rajaraja II and is replete with stone sculptures, bronze icons, paintings, musical pillars and features a 24 metre vimana. The mantap in the front is in the shape of a chariot with wheels drawn by horses. This is popularly known as Rajagambhira Thirumandapam. The goddess is revered as Perianayaki Amman. The temple is much smaller in size compared to the ones in Thanjavur and Gangaikonda Cholapuram. But it is certainly much more ornate in its execution. One interesting feature of this temple is that there is no circumambulatory path around the sanctum. Each sculpture in the temple is a masterpiece of Chola art. The life and times of the 63 nayanmars or Shaivite saints are beautifully depicted through frescoes in the shrine.

Darasuram is a suburb of Kumbakonam and is about 290 km from Chennai. It is well connected by road and rail.

The nearest airport to all these temples is Trichy airport.

The three temples have been listed by UNESCO as great living Chola temples as they follow Vedic traditions and conduct worship based on Agamas, right from the time of their consecration throughout the ages spanning around 1000 years, attracting devotees from all parts of the world who come to see the Lord in all his majesty and glory and pay their obeisance in these temples. Thus the temples have influenced the people playing a significant role in their lives. Another important reason for declaring them as national treasures is their contribution to the art and culture of the period with their amazing wealth of sculptures, paintings, bronze castings and inscriptions. The temples themselves stand as testimony to the ancient science of Shilpa shastra and Vastu principles. They are a delight to any student of architecture for the learning they convey. We should take pride in preserving these temples for posterity as they are symbols of a glorious past that we have inherited from our forefathers.