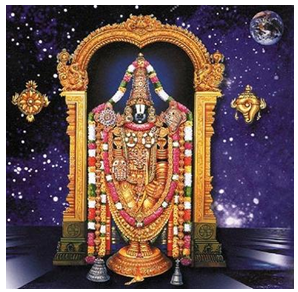 The Tirupati Sri Balaji Temple, located on the Venkatachala, the seventh peak of Tirupati Hills (banks of Swami Pushkarini Lake), is a place of tremendous spiritual significance. Considered to be the abode of Lord Venkateswara, the temple is abuzz with devout believers of the Lord himself. Lord Venkateswara, also known as Balaji (Lord of Lakshmi), is believed to be one of the numerous incarnations of Lord Vishnu. Lord Venkateswara is believed to bless his devotees with bounty and grace in their lives. The major pilgrimage spots of the area are Sri Venkateswara in Tirumala, shrines of Govindaraja and Padmavati.

The presiding deity of the Tirumala Temple is Tirupati Balaji or Sri Venkateswara Swami. Believed to be one of the earliest manifested images of gods and goddesses, the idol (Mulaberam) is beautifully balanced and proportionate. Lord Vishnu, also locally hailed as Sripathi, Govinda, Sreenivasa, Narayana and Balaji, is believed to rest on the seven-headed serpent, Adisesha, here. The seven hills of Tirumala denote the seven-headed serpent. The idol of Balaji is believed to be one of the eight Swayam Vyakta Sthalas (spontaneous image locations). The two meter high idol of Tirupati Balaji is depicted as standing upon a lotus and has four arms and the images of goddesses Padmavati and Lakshmi on the chest.

Owing to the tremendous popularity and vibrancy of the temple, it has been a subject of conjecture and discussion for a long time. Numerous scholars have proposed different versions about the origin of this temple. There have even been references to Buddhism and Jainism while tracing its origins. Numerous Dravidian scholars have referred it to be the temple of Lord Muruga.

The first inscriptions on the Tirupati Temple can be traced back to the 9th century AD. The temple has been dedicated to various other deities by different schools of thought, but it was Sri Ramanujacharya, the great philosopher and saint, who through rigorous research established it as the temple of Lord Maha Vishnu himself.

Amongst the devotees of Tirupati Balaji were the Cholas of Thanjavur, the Pallavas of Kanchipuram, the Pandyas of Madurai and the chieftains of Vijayanagar. Generous donations for the temple began flowing in right from the advent of the Vijayanagar dynasty. Incessant donations also poured in during the rule of the Marathas and other contemporaries, especially General Ragoji Bhonsle.

Till 1933, the Mahants were directly responsible for the administration of the temple. The Madras legislature passed a special act in 1933, which empowered Tirumala Tirupati Devasthanams (TTD) Committee to directly monitor the administration of the temple. In 1951, the 1933 act was repealed and replaced by a Board of Trustees and an executive officer appointed by the Government of India.

The origins of the temple have diverse theories attached to it. However, the versions from the Varaha Purana and the Bhavishyottara Purana seem to be the most credible. Rangadasa, a devout Lord Vishnu worshiper, after bathing in Swami Pushkarini, had attained the vision of Lord Vishnu under a tamarind tree. Impressed by the devotion of Rangadasa, Lord Vishnu blessed him to be reborn as an affluent ruler. After being reborn as Tondaman, son of Suvira and Nandini, Rangadasa followed the directives of Lord Vishnu and built a prakaram and dvara gopura. Later, Padmavati, ruler of Tondamandalam, married Venkateswara, and the marriage was directly held under the auspices of Lord Brahma. Another story explains Lord Vishnu’s journey towards Venkatadri and Saint Brigu’s tryst with various personages before meeting Vishnu.

The Tirupati Balaji Temple is considered to be one of the most bounteous and sacred temples of the country. The widespread belief that one will get more than one donates, makes this temple one of the most voluminous recipients of donations of the country. The thronging of lakhs of devotees annually in this temple is a pertinent example of cultural and religious synthesis amongst the devotees. 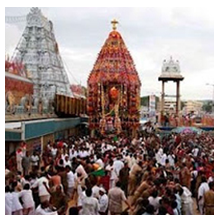 A masterpiece of Dravidian architecture, the Tirupati Balaji Temple’s sanctum sanctorum is magnificent. The Anandavimanam is entirely made out of gold and is often lit. The Vaikunda Pradakshinam, the innermost enclosure, is opened for public viewing once a year. The doorways, shrines and the mandapams are richly carved and embellish the temple complex.

The extremely popular cuisines of this pilgrimage village are Semia Payasam, Shreemal, Halwa, Tirupati Laddu, Sweet Rice, Kaja and various Andhra Meals loaded with Rasams, Sambhars, Vegetables, Idly, Uttapam, Dosa, Pesarattu, and Chutneys. Alcohol and non-vegetarian food are strictly prohibited in and around the temple premises. The generous offerings of food are distributed amongst devotees as Prasadas. The temple kitchen also makes grand arrangements everyday for the devotees.

The belief that Lord Venkateswara is fond of festivals has been realized into festive occasion every moment. The most important being the Brahmotsavam celebrated in September-October. A second Brahmotsavam is also celebrated as Navaratri Brahmotsavam. Sacred text and daily worship are performed with fervor every day. In Brahmotsavam, chariot of Lord Brahma is believed to be the initiator. Some of the most important celebrations are Kalyanotsavam, Gangamma Jathara, Rathasapthami, Dolotsavam and Arjita Brahmotsavam festivals. Rayalseema food and dance festival, which coincides with Brahmotsavam, is a major tourist attraction.