India is a country where most people follow Hinduism. A large population in India are Hindus. There are about 33 crores Gods and Goddesses in Hinduism! Keeping up with this number of Gods and Goddesses, there are many religious places in India. Hinduism believes that God resides in everything – right from a stone sculpture to a naturally formed ice ‘shivling’, God is believed to be omnipresent. Hence, Hindus largely worship nature. River Ganga, Ice Shivling in Amarnath and the Ashtavinayak Ganapati are a few examples of the same.

God isn’t always necessary to reach to, is he/she? There are ghats that take painstaking climbing which people, rather devotees, very happily climb chanting God’s name for strength. All of this only for one glimpse of God. Such is the power of religion! Let’s have a look at a few such places of religious importance. 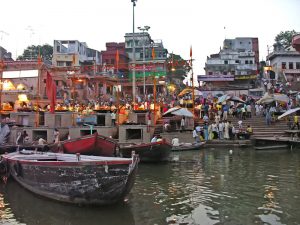 This Ghat is popular as one of the most spectacular Ghats in the spiritual capital of India, Varanasi. According to a Hindu legend, this ghat was formed by Lord Brahma to welcome Lord Shiva. This is the main ghat of Varanasi located along the holy River Ganga. 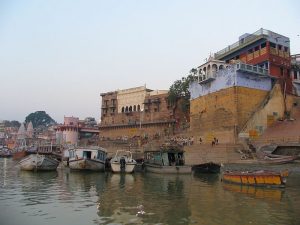 Varanasi is a mixture of religion, philosophy, culture and crafts. There are many places in Varanasi to visit. This is yet another Ghat located in this beautiful city. This Ghat is situated north to the famous Dasaswamedha Ghat. Built by Maharaja Man Singh, this place is home to many religious temples like Rameshwara Temple and Someshwara Temple. One of the finest Ghats in Varanasi, it perfectly reflects the historical era. This ghat is particularly famous for the Shiva Temple which was built in 19th century by the Nepalese king named Sanjay Vikram Shah. This ancient temple is well-known for architectural grandeur. For all the devotees who want to wash away their sins in the holy River Ganga, this ghat is the perfect place. Calling Rishikesh the capital of all pilgrimage places won’t be wrong! Triveni Ghat is located in Rishikesh, Uttarakhand, India. Located on the banks of river Ganga, it is the biggest and the most famous ghat there. The Shiv Aarti at Triveni Ghat is divine and is attended by many devotees of Lord Shiva. There are many places to visit in Rishikesh for religion lovers.

Located in Balghat in Madhya Pradesh, India, Bajrang ghat is a quiet haven for all the nature lovers. On the other side of the ghat is a big submerged rock called ‘Jalaj’ which serves as a resting rock for most swimmers. This place is very obviously famous for ‘akhadas’ too.

There is no other place better for a holy bath in river Ganga than Gau ghat it is said. Gau ghat is located in Haridwar, Uttaranchal, India. The place also has some very lip smacking street food! People from all over the country come and worship this place, as well as submerge the ashes of the departed souls. 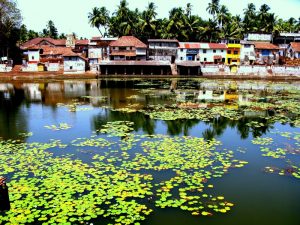 Photo by Jean-Pierre Dalbéra, CC BY 2.0

Who has not heard of Kumbh Mela? Well, if you have not, now you know that the Kumbh Mela takes place nowhere else but in Ram Ghat. Ram Ghat is located in Ujjain, Madhya Pradesh, India. Ram ghat is one of the most famous and oldest bathing ghats. The city of Ujjain is located on the eastern banks of the river Kshipra. Manikarnika ghat has a well named Manikarnika Kund that was built by Lord Vishnu. The place is largely known for cremation. Manikarnika Ghat is located in Varanasi. The place has a pretty interesting story behind it. Interest people can check it out on the internet. Named after Tulsidas who lived there and composed ‘RamcharitraManas’, Tulsi ghat is located in Varanasi. Tulsi ghat is most famous for sacred and holy baths.

Rohit is a history buff and a travel enthusiast who wishes to learn more about cultures and traditions across the world. His zeal to explore has taken him to some undiscovered places across Earth and have helped him satiate his desire to travel. You can read his travel stories at http://www.transindiatravels.com/.