India is a land of temples and spirituality and even in the midst of westernization and modernization people of India always try to adhere to their age old way of life of which spirituality is as vital as its backbone. With the presence of many gods and goddesses symbolizing the diversified aspects of life our golden legends have always remained an abundant source of timeless stories and inspiring thoughts. Lord Shiva as the omnipotent and the omnipresent has lots of temples scattered all over India. Among them the 12 Jyothirlinga temples enjoy special reverence and fame.

Trimbakeshwar Shiva Temple is located at Trimbak, 28 km from Nashik District, Maharashtra. The temple is devoted to one of the Hindu Trinity, Lord Shiva, who is present here in the form of Jyothrilinga. Trimbakeshwar Shiva Temple is located at the foothills of the Brihmagiri Mountain which is around 18 kilometers from Nasik city. Brihmagiri is one of the ranges of the Sahayadri Valley. Architecture and sculpture of the temple is its main attraction and the entire temple is constructed with black stone.

As mentioned in Shiv Purana, Lord Shiva appeared at the place and resided as Trimbakeshwar owing to the earnest request of River Godavari, Sage Gautam and many other Hindu gods. To mark this occasion, all the heavenly gods get present here once in every twelve years, when the Jupiter stays in the zodiac sign of Leo.

The combination of River Godavari, Brahmagiri Mountain and Trimbakeshwar Temple make this place a perfect spiritual hub and it is believed that anybody who visits the place and seeks the holy blessings of Lord Shiva would attain salvation. 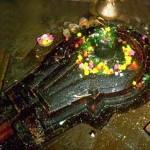 Lord Shiva, in his Jyothirlinga form is the presiding deity at the temple. There are two Nandi idols present here, one in the courtyard and the other inside the temple. The three thumb-size Lingas present inside the sanctum are identified as Trinity of the Hindu religion. The Trinity represents Lord Brahma (as creator), Lord Vishnu (as organizer) and Lord Shiva or Mahesh (as destroyer).

The most important feature of the Trimbakeshwar Temple Jyothirlinga is that the Lingas are placed in a cavity on the floor, submerged in the natural Ganges water. A life size mirror is placed for devotees to get a clear view of the Lingas. It is said that the recent erosion in the Lingas is owing to the eroding character of the human society. A jeweled crown placed over the golden mask of the Trinity is believed to have been present since the times of the Pandavas.

Rudrashak is a religious fruit found in Lord Shiva’s neck in the form of Rudra garland. Rudrashak trees are also popularly found at Trimbakeshwar.

Trimbakeshwar Temple is built in an ancient Hindu architectural style. The construction of the present temple was commissioned by Peshwa Nanasaheb and was built out of pure basalt (Volcano lava). The much well known Nasak diamond adorns Lord Shiva idol at the Trimbakeshwar Temple. Edward J. Hand, a trucking firm executive from Greenwich, Connecticut, USA presently holds the diamond.

There are popular legends associated with origins of Trimbakeshwar Temple. One such legend defines the Lingodbhava manifestation of Lord Shiva at the temple. It says that once Lord Brahma and Lord Vishnu were searching the origins of Lord Shiva and at the same time Lord Shiva emerged in the form of cosmic fire column. Brahma and Vishnu set off to find out the top and the bottom of the fire column. In the game, Brahma lied that he has found the top of the column of the fire upon which Lord Shiva got extremely infuriated. Angry Shiva cursed Brahma that no would worship him on the earth and in turn Brahma also cursed Shiva that he would be pushed beneath the ground. Due to the curse, Lord Shiva descended beneath the Brihmagiri Mountain in the form of Trimbakeshwar Temple.

Another legend associates Gautama Maharishi with the origins of Trimbakeshwar Temple. As per the legend, Sage Gautama resided on the Brihmagiri Mountain along with his wife Ahilya. By virtue of Lord Varuna, the sage had received an infinite pit with inexhaustible supply of foods and grains. This made other rishis extremely jealous about Sage Gautama and they let a cow enter his granary. Unfortunately, when the sage was warding off the cow from the pit with a bunch of Durba grass, the cow died. Thereafter, Sage Gautama meditated upon Lord Shiva and beseeched him to bring the River Ganges down to his domicile for purification. Shiva was extremely pleased seeing the devotion of the sage and assented and thus the river flowed there forever and was named Godavari. On everybody’s earnest request, Lord Shiva started residing beside the river and it is said that Trimbak fulfills all the desires of the devotees who come to his worship and emancipates them from their sins and miseries. Since, goddess Parvati also arrived along with Lord Shiva and the Ganges, the place began to be known as Trimbakeshwar, meaning three Lords.

The Trimbakeshwar Temple is a magnificent stone structure built in the Indo-Aryan style. Its imposing dimensions, architectural adornments are quite befitting of its eminence. It is encircled by a massive stone wall pierced by two dwaras and covers 260 x 220 feet area Tall dipmalas adorn the Mahadwara on either side. In front of the temple, a beautifully sculptured bull — Nandi is installed in a cupola.

The black stoned temple, built in a spacious courtyard, represents the Nagara style of architecture. A mandapam with doors on four sides is present right before the garbagriha and the antarala. The openings of the three sides of the doorways are decorated with arches and pillars. A beautiful roof-like structure is formed on the mandapam with the rising curvilinear slabs in the steps. The temple is an epitome of Hindu archaic sculpture featuring humans and animals, yakshas, figures of gods, floral designs, and running scrolls.

Shri Ram Janmotsav: The celebration related to the birth of Lord Rama is an important festival here and lasts for fifteen days. The Panchvati carnival is worth attending during this period.

Rathyatra: Procession on two separate chariots (Raths) carried out on the day of Ramnavami. The first chariot is Ram Rath and the second is one is Garud Rath.

Mahashivratri: This Lord Shiva festival is celebrated with great zeal at Trimbakeshwar Temple.