The historical city of Ujjain is located in the ancient Malwa region of Madhya Pradesh, Central India. It is regarded as one of the seven major sites of Hindu pilgrimage. The picturesque site is surrounded by River Shipra.

Unfortunately, nothing much has been known about the history of Ujjain as most of its records are lost in antiquity. All that is known is that since the 4th century BC the city has been enjoying the position of being the Prime Meridian for Hindu geographers. Currently, Ujjain is also the administrative hub of Ujjain Division and Ujjain District.

As mentioned in the ancient epic Mahabharata, Ujjain was better known as ‘Avantikapuri’ and ‘Avanti’, and was famous as the capital of Avanti Kingdom.

There is another popular legend associated with the name of the city. The legend has it that the place was named ‘Ujjayini’ by Lord Shiva after gaining victory over the demon King Tripuri. ‘Ujjayini’ literally means one who conquers pleasure and pride.

Another Hindu legendary tale associated with Ujjain that has made it one among the four Kumbh Mela sites is that of the churning of the oceans. It is known that when gods and demons were churning the ocean, few drops of nectar got sprinkled on Haridwar, Ujjain, Prayag, and Nashik. Thus, both River Shipra and Ujjain are considered extremely holy as per the Hindu tradition. The Kumbh Mela alternates among Haridwar, Ujjain, Prayag, and Nashik every three years. The Sinhast fair is held every 12 years here in the month of Chaitra (March-April) when Sun is in Aries and Jupiter is in Scorpio. The festival of Shivratri is also celebrated with great pomp and show.

Throughout the year, Ujjain attracts thousands of tourists as its historical and religious significance tremendously boosts its travel and tourism industry. It is a perfect blend of ancient tradition and modern lifestyle.

Also, Ujjain is home to Lord Mahakaleshwar and this Jyotirlinga present here is one of the twelve Jyotirlinga shrines of Lord Shiva scattered at various different place in India.

At Ujjain, Lord Shri Krishna, brother Balarama and friend Sudama got their education from Maharshi Sandipani.

Records closer to the past show that great rulers like Ashoka and Vikramaditya once ruled Ujjain, and renowned poet Kalidasa also composed the finest of his works here.

The period between 6th and 3rd century BC witnessed a number of milestone social and political changes in Indian subcontinent. The ambitious potentates of this Hindu land established four great kingdoms (Mahajanapadas) with triumph in northern India. These four were named Kausala, Avanti, Vatsa and Magadha. Avanti Empire during this time was ruled by King Chandra Pradyota Mahasena and its capital was Ujjain. During 4thCentury BC, this kingdom was a Mauryan predominant, and Chandragupta I was the first from this line to have had ruled Avanti.

The Great Ruler Ashoka Turned Into A Buddhist Follower –

During the mid 3rd Century, King Ashoka became the Governor of Avanti and Taxila. Those were the times when Asoka was better known as ‘Asoka, the Terrible’ owing to his ruthless means of capturing other lands.

However, after Ashoka’s transformation into a spiritual being and his initiation to Buddhism during 257 BC, he constructed around 1,000 to 84,000 stupas at various places including Ujjain and neighboring areas. Metal and stone statues of Buddha have also been excavated from various parts of the district.

Till the rule of Ashoka, the Great, the land of Madhya Pradesh was inhabited and ruled by the Hindus. But, after the death of Ashoka in 232 BC the empire started crumbling, paving way for Indo-Greek and Scythian (Sakas) invaders here. As per the historical records, Ujjain’s Kshatrapa princes were the descendents of Lord Chastana (related to the Greek mathematician and astrologer Ptolemy). Later, the Sakas found the line of the Kshatrapas in Ujjain. The foreign decadency in Ujjain continued until the Gupta dynasty conquered the land and ruled a chunk of Madhya Pradesh amid 320 AD – 540 AD.

Chandragupta Vikramaditya, also known as Chandragupta II ruled the place from 380 to 415 AD. He set up his court in Ujjain which was attended by many contemporary renowned scholars and poets, including the celebrated poet and author of Abhigyan Shakuntalam, Kalidasa.

Ujjain was visited, adorned, ruled, and even plundered by various rulers during different periods. In the 4th and 5th centuries Ujjain was an integrated part of Gupta dynasty.

During the reign of the king of Kannauj, Harshavardhana, who ruled a substantial part of Indian subcontinent for four decades, the renowned Chinese pilgrim Hiuen Tsang visited India. Hiuen Tsang described Ujjain as ‘the city of splendors’.

Between 6th and 12th centuries, Ujjain witnessed many ups and downs. The city was invaded and plundered many times by the powerful neighboring rulers like the Chandelas of Bundelkhand, the Chalukyas of Gujarat and the Rajputs. Even after that, the city was ransacked by invaders from the west.

Since the 12th century, Malwa Plateau was flooded with different Muslim invasions.

Later, Ujjain was on and off plundered and stripped of its wealth by many Muslim leaders of Tughlaq Dynasty including Muhammad-bin-Tughlaq in 1327 AD, and Firoz Shah Tughlaq in 1351 AD.

Malwa under the Khalji Sultan –

Ujjain being the economic, political, and cultural capital of the region of Malwa had always been most affected by the atrocities of the invaders. Malwa, as an independent dynasty was established by Mahmud Khan. Khalji Sultans of Malwa was thus founded in the year 1436 AD. From then on till the end of that century, the Malwa region always remained the subject of dispute amongst the local Rajputs, the Delhi Sultanate, and the Malwa Sultans.

For a while, Ujjain was also ruled by Afghan Sur Dynasty by Shujjat Khan and his son Baz Bahadur. The name of Mughal King Aurangzeb is worth mentioning as he contributed greatly in preserving the lost glory of the ancient temples and invested a good amount from his treasury in the renovation project.

During the 17th century once again the Malwa region came under the leadership of Indian rulers. Under the hegemony of the Marathas, many temples were constructed here; Hara Sidhhi Temple and Gopal Temple are also amongst them. In 1750 AD, the Scindias shifted their economic and financial capital from Ujjain to Gwalior.

Mahakal Temple – It is one of the twelve jyothirlingas located in different parts of India. Legend and importance related to the Mahakaleshwar temple is mentioned in various Puranas.

Harsidhhi – It is one of the most visited temples of Ujjain. The name Harsidhhi is the contracted form of Harshad Amba – The Happy Mother. The idol here is the personification of two Hindu goddesses, Amba and Kalika (Kali). Other names of the goddess are Sikotar Momai Harshal, Harshad, Vahanvati Mata and Harshat Shikotar.

Chaubis Khamba Temple – As per the records, the temple is an architectural delight of 9th or 10th century. This temple was considered to be the royal and majestic entry point of Mahakala-Vana. The ruins of the boundary wall lies near the gate. Each side of the gate is adorned with one beautiful image of a goddess. The two goddesses also have with their names Mahamaya and Mahalaya inscribed in them.

Triveni Navgraha – Shani Mandir – The temple is especially dedicated to the nine ruling planets i.e. Navagraha. The astronomical positions of the nine planets and their characteristics have significant role to play in Hindu traditions and rituals. The temple is located on the Triveni Ghat, alongside the River Shipra.

Chintaman Ganesh Temple – It is the biggest temple of Lord Ganesha in Ujjain. The name ‘Chintaman’ literally means ‘relieving tensions’. The sanctum is very old and on the either side of the presiding deity Ganesha, there are the idols of Riddi and Siddhi. Thousands of people visit the Chintaman Ganesh Temple all round the year and it is believed that Lord Chintaman relieves his devotees from all worldly anxieties.

Nagarkot Ki Rani – She is called the guardian deity of the southwest corner of the ancient Ujjain. The place attracts good number of archeologists and historians as it has both great archaeological and historical importance. Popular legends of Bharatrihari, Vikramaditya and Natha cult are linked to this place.

Sandipani Aashram – As mentioned in the Puranas and other scriptures, Yogeshwar Krishna along with his friend Sudama received their education at the ashram of Kulguru Sandipani. The ashram has also found its mention in various other Indian scriptures, Brahma, Agni, Mahabharata, Shrimad Bhagvata, and Brahmavaivarta.

Garhkalika– It was the most favorite place of visit of the poet Kalidasa. Various brick remnants, images, a portion of the plinth etc. belonging to different periods, excavated from the basement of this place, are mentioned as below –

the Shunga period – 1st century BC

Bhartuhari Cave – In the ancient days, King Bharturuhari used this cave for the yogic practice. Along with its historical significance this Cave is also considered a heritage in itself. The Cave is regarded as extremely ancient. The dancing Shiva wielding Khatvanga is related to the Kapalika cult.

Pir Machchindar – This place is famous as the tomb of Matsyendra Nath, the preceptor of the Nath sect. The followers of this sect revered their saints as Pir. Since Muslim saints are also regarded as Pir, the place bear equal importance for Hindu and Muslims.

Siddhavata – A pilgrimage to Siddhavata at Ujjain is equally sanctified to the worship of Akshayavata of Prayag, Panchavata of Nasik, and Vamshivata of Vrindawan. The followers of Nath sect visit this place and Skanda-purana refers to this place as preta-shilla-tirth.

Kaliyadeh Palace – Kaliyadeh palace was once a famous Sun Temple. The Surya-kunda, Sun-temple, and Brahma-kunda – all three have found their mention in the Skanda Purana. People from all parts of the country even today take religious bath in the tank of Surya-kunda. 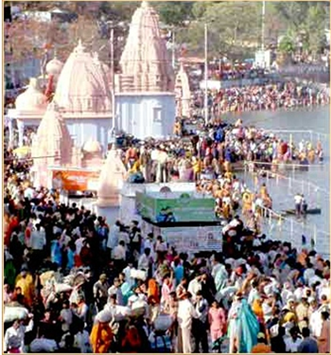 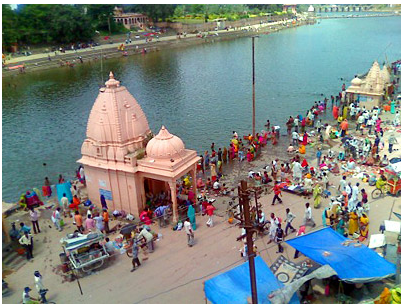