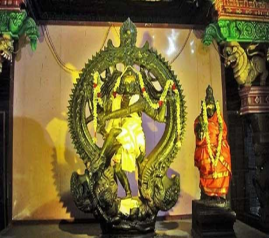 Uthirakosamangai, is a famous Shiva temple which is located in Ramanathapuram district of Tamil Nadu. The temple is an ancient one, and it is believed to have been built by the Pandya kings. The temple has been sanctified by the Shaivite saints Sri Manickavasagar and by Sri Arunagirinathar through their divine hymns.

The temple is considered as very sacred by the Shiva devotees, and it also attracts lot of tourists from all over India, due to its marvellous structure.

The temple contains shrines of Mangalanathar, Mangalambigai and Natarajar and the temple conducts regular pujas, and it would be opened to the public between 5:30 a.m. to 8 p.m. and annual festivals are also celebrated grandly at this temple. As per ancient legend, it is believed that at the present place of the temple, lot of Rishis were once performed severe penance on Lord Shiva. We can also watch lot of Holy Shiva Lingams which is situated inside the temple. Apart from the main shrines, shrines for Lord Vinayaka, Ma Durga, Chandikeswarar, Dakshinamurthy, Murugan and Navagrahas are also found inside the temple premises.  Daily Abhishekam, Decoration, Holy Prasad Offering and Deeparadana would be performed for all the deities in the temple.

The main annual festivals celebrated in this temple are Shivarathri and Thiruvathirai. It is also believed that at the present place of the temple, once Lord Shiva had appeared in the form of fire flames before Lord Vishnu and Lord Brahma in order to prove his supremacy, and it is also believed that Lord Muruga had given his darshan to Lord Indra at the present place of this temple.

Our India consists of lot of temples, and especially in Tamil Nadu, we have innumerable temples built for Lord Shiva. Since this temple was visited by ancient Shaivite saints, and since this temple is considered as very sacred, and hence, it is our duty to visit this ancient temple of Lord Shiva at least once in our life time, in order to add lot of good karmas to our life account. We can also watch the YouTube videos which contains about the details of this temple, in order to know more information about this temple.