Baba Baidyanath, one of the twelve Jyothirlingas of Lord Shiva, is situated at Deoghar. ‘Deoghar’ literally means ‘the House of Gods’ and Vaidyanath at Deoghar is the place where all the gods successfully seized nectar from the demons. Anokhi Kashi is another name given to the place and the shrine of Baba Baidyanath is known as Dwaadash Jyothirlinga.

The Jyothirlinga here is special because it is the only Kamana Linga, the one with the power to accomplish all dreams. At the same time, worshiping Baba Baidyanath relieves a devotee from all kinds of miseries and helps him attain moksha.

Other temples present in and around the township of Deoghar are –

However, there is an ongoing controversy over the authentication of Vaidyanath Jyothirlinga. A school of thought opines that the original shrine of Lord Vaidyanath is present at Kiragram in Punjab while the other is present at Dabhoi in Gujarat. 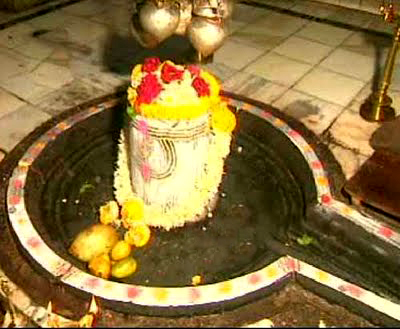 There are 22 temples in the vicinity and the tallest and biggest amongst them is the 72 feet lotus-shaped temple of Vaidyanath dedicated to the worship of Lord Shiva. It is an east facing temple and just near the temple is positioned the famous Sivaganga Lake.

The Jyothirlinga at Vaidyanath is slightly broken from the top and as per the famous legend this happened when Ravana, the King of Lanka, tried to uproot it from its location. Other important features of the temple is –

–      3 ascending shaped vessels of gold right on the top

The Linga is placed on a large basalt slab. It is around 4 inches tall and 5 inch in diameter.

The rituals followed here consist of pouring water on the lingam, smearing it with sandal paste and offering flowers and a few grains of rice. Offerings of money, in silver or gold or by way of other movable and immovable properties, have been showered from time immemorial.

In ancient scriptures and Puranas, there is quite a lot written about the sanctity of the place. Even during the Mughal reign in India, Vaidyanath Jyothirlinga was amongst one of the most visited religious places of India. Khulasatu-i-twarikh, written amid 1695-1699 AD, has mentioned important facts on Vaidyanath Jyothirlinga. Dr. Jadunath Sarkar has referred a lot to Khulasatu-i-twarikh in his work on Aurangazeb. To quote Sarkar’s words,

“In the district of Monghyr on the skirts of the hill, there is a place named the Jharkhand of Baijnath (Baidyanath) sacred to Mahadeva. Here a miraculous manifestation puzzles those who look for the outside of things. That is to say, in this temple there is a pipal tree, of which nobody knows the origin. If any one of the attendants of the temple is in need of the money necessary for his expenses, he abstains from food and drink, sits under the tree, and offers prayers to Mahadeva for the fulfillment of his desire.

After two or three days the tree puts forth a leaf covered with lines in the Hindi character, written by an invisible pen, and containing an order on a certain inhabitant of any part of the world for the payment of a certain sum to the person who badly prayed for it. Although his residence may be 500 leagues from Baidyanath, the names of that man and his children, wife, father and grandfather, his quarter, country, home and other correct details about him are known from the writing on the leaf.

The high-priest, writing agreeably to it on a separate piece of paper gives it to that attendant of the temple. This is called the hundi (cheque) of Baijnath. The suppliant, having taken this cheque, goes to the place named on it according to the directions contained in it. The man upon whom the cheque has been drawn pays the money without attempting evasion or guile.

A brahman once brought a hundi of Baijnath to the very writer of this book, and he, knowing it to be a bringer of good fortune, paid the money and satisfied the Brahman. More wonderful than this is a cave at this holy place. The high-priest enters into the cave once a year, on the day of the Siva-brata, and having brought some earth out of it, gives a little to each of the ministers of the temple. Through the power of the truly powerful, this earth becomes turned into gold, in proportion to the degree of merit of each man.”

o   Although there is hardly any concrete evidence in support of the early history of Vaidyanath Jyothirlinga, many legends attribute that the temple was discovered by a young man Baiju after it went into ruins several times during different historical phases. Baiju worshiped the Linga religiously and after sometime Jyothirlinga became famous Baba Baidyanath.

o   There is a famous story that during the Mughal period Puran Mal constructed the Vaidyanath Jyothirlinga Temple on the request of Raghunath Ojha.  Against the assertion made by some of Indologists maintaining Puran Mal as the original builder of the temple, Dr. Rajendralal Mitra claims that there was already a temple built since the ancient times while Puran Mal only rebuilt the existing constructed temple.

o   However, inscription at the entrance of the temple says that a Chola warrior named Aditya Sena, who arrived at temple of Vaidyanath, first built a Vishnu Temple here where an image of boar incarnation of Vishnu was later built by Bala-bhadra. The 7th Century A.D. characters referring to the boar statue also coincide with the dates when Aditya Sena arrived here. Again, the tank which is still present near the temple vicinity was founded by Aditya Sena’s wife Konadevi.

o   The Chandra Kupa located at the entrance of the temple was brought here by Ravana and the Kupa contains the sacred waters from all pools of the world.

o   Shiva Ganga is a large tank located near the temple. As per the assertion made up by Dr. Rajendralal Mitra, Akbar’s General Maharaja Man Singh put up the embankment to the tank which later came to be known as Manasarovara.

o   One such legend says that during Treta Yuga, the King of Lanka, Ravana, long propitiated Lord Shiva and asked him to descend on earth. Pleased Shiva accepted Ravana’s invitation and came on earth in the form of 12 Jyothirlingas. The Lord presented one of the twelve Jyothirlingas to Ravana and asked him to carry it wherever he would like. However, the Lord also gave Ravana a challenge that if the Linga was put anywhere on the earth it would get deposited then and there. Ravana carried the Linga extremely carefully to take it all the way to Lanka. However, other gods feared the consequences of the installment of the Linga at the place of the demon king. All the gods together plotted a ruse in which Varuna entered into the stomach of Ravana forcing him to instantly come down to earth in order to ease himself. At the same time, Lord Vishnu, dressed as an old Brahmin, appeared before Ravana.  Ravana handed over the Linga to Vishnu and asked him to remain holding the Linga until he would arrive relieving himself. The moment Ravan left the place; Lord Vishnu put the Linga on the ground and left the place. Upon his arrival, Ravana understood the whole plot and anxiously tried to uproot the Linga hence causing a break in it. Ravana, however, remained at the same place propitiating the Jyothirlinga on a daily basis. Later, the place where Ravana came down to earth was named Harlajuri, located around 4 miles north of Deoghar where the Lingam was deposited by Lord Vishnu.

o   Another popular legend associates the episode of Shiva Tandav with the place of Deoghar. When Sati (goddess Parvati) ended her life after being unable to bear the humiliation, Lord Shiva stuck the corpse of Parvati with his trident and started wandering around in hysteria. Lord Vishnu intervened at the right time, and save the world from utter destruction by cutting the corpse of Sati into 51 different pieces. The heart of Sati fell at Deoghar.

The Vaidyanath Temple is encircled by a stone wall and there are many more temples present within its complex. Built in the famous Nagara style of architecture, the seat of the presiding deity – in the form of Jyothirlinga – is decorated inside the main sanctum.  The temple possesses a large square mandap with its sanctum covered with a tall shikhara. The temple porches have their own story and significance.

In front of the mandap, a porch can be seen resting on 4 pillars on the entrance of which resides a beautiful Nandi statue. Beautiful images of many gods and goddesses are carved intricately on the temple walls. Makara Sankranti and Mahashivratri are two important festivals which are celebrated here with great pomp and show. The temple is believed to have been built by Lord Vishwakarma himself as till date there isn’t a single ventilated door which could be opened by today’s modern scientist or archeologists.