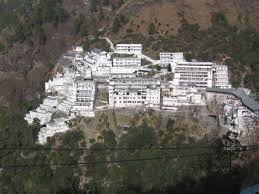 Situated on the Trikuta Mountain, Mata Vaishnavo devi is a temple dedicated to goddess Shakti. It is nestled at a height of around 5200 feet and is one of the Shakti sthalas.

o   Maha Kali – Representing the Tama Guna (darkness), the Maha Kali form delivers the message to persistently combat darkness and to steadfastly hold on to the path of righteousness.

o   Maha Saraswati – Representing Satva Guna (wisdom and knowledge), the Maha Saraswati manifestation aids her devotees to clearly distinguish between good and bad, and adopt the path of righteousness.

The confluence of these three attributes on to a single form of Shakti is essentially regarded as Mata Vaishnavo devi.

The Yatra: The Yatra or the journey towards Mata Vaishnavo devi Temple is essentially 61 km form Jammu and the last phase of journey is to be traversed on foot. After entering the cave, the narrow Charan Ganga tunnel takes the pilgrim to the sanctum sanctorum. Chanting of ‘Jai Mata Di’ reverberates in the atmosphere.

The legend of the origin of Mata Vaishnavo devi Temple takes us back to around 700 years when at Pandit Shridhar’s place, a bhandar was organized by the Mata. Even Lord Krishna advised Arjuna to seek the blessings from Mata Vaishnavo devi.

The amalgamation of the three manifestations of Shakti pulled into a collective Tejas (spiritual strength). A magnificent bright light was generated from the coalescence of Tajas and the genesis of a beautiful young girl took place. The event was justified by stating that she would be upholding righteousness in the world. Thus Vaishnavi after going through penance, austerity and hardship reached the foothills of Trikuta. After setting up an ashram, Vaishnavi was pursued by Bhairon Nath (able disciple of Gorakh Nath). Vaishnavi had to flee her ashram at first and thereafter had to kill Bhairon Nath. Since then Vaishnavi assumed the shape of three heads (pindis) and dedicated herself into meditation forever.

As aptly said by Jagmohan (Former Governor of Jammu and Kashmir), “All over the world there has been no more beautiful a place than the journey from Chandanvari to the gufa of Vaishno Devi Shrine. The Sheshnag area the Panjtarni area and the area around Poshwa is just out of heaven. We just cannot imagine how beautiful it is, how lakes flow, how little streams flow, how there is a mountain, how there is a hillock, how there is greenery all around and how there are roads. Every signpost has a mythology. The Sheshnagto Panjtarni area is just rooted in Indian culture and religion. This shows a unique and spiritual mind and soul relationship of Kashmir with rest of India, which has existed for 5,000 years. If we travel from Chandanvari to this place we will see hundreds of signposts of Indian culture, Indian religion and Indian mythology. It is steep and saturated with this.”

Mata Vaishnavo devi is enshrined inside a cave, which is embellished with the paintings of numerous gods and goddesses of the Hindu pantheon. The ‘Sher Ka Panja’ symbolizes the mount of Mata. The explicit images and symbols of the Vir Langur (Hanuman) and the Sesh Nag are also depicted inside the cave.

Bhairon Ghati: The track between Vaishno Devi and Sanji Chhat is extremely hazardous in nature and is known as Bhairon Ghati.

Sanji Chhat: A plateau located before the holy shrine of Vaishno Devi offers a beautiful panoramic view of River Chenab and this area is called the Sanji Chhat.

Before sunrise and after sunset the Aarti of Mata Vaishno Devi is performed. It takes almost two hours to perform the Aarti and is performed inside the sanctum sanctorum. The sub-zero temperature during the winter can be extremely harsh for the devotees and therefore pilgrimage is most active during March-April and September-October.