Located at the hill top of Simhachalam in Vishakhapatnam, Andhra Pradesh, the Varaha Narasimha Swamy Temple is dedicated to Varaha Lakshminarasimha, a combination of Varaha and Narasimha. It is believed that the temple is the residence of Lord Narasimha and he provides ‘Nijaroopa Darshan’ (holy manifestation) only for twelve hours in a year. For the remainder of the year, the Lord is enveloped in sandalwood paste. The temple is also believed to be one of the Narasimha Kshetras or the shrines of Lord Narasimha.

The principal deity of the Varaha Narasimha Swamy Temple is Lord Varaha Lakshminarasimha. It is essentially Lord Vishnu in the combination of Varaha and Narasimha avatars. The deity covered with sandalwood resembles a lingam and it is only for twelve hours in a year that the Lord manifests himself in his true form i.e. during the Chandanyatra festival. Also known as the Great Protector, the original form of the deity is in the tribhanga posture with two hands, the head of a lion on a human torso.

Some of the Tamil and Telugu inscriptions state that King Krishnadevaraya had made huge donations to the temples of the region, especially in the name of his mother, Nalamba. But no excavation or archaeological findings testify this as fact. Recent archaeological studies of the region have also discovered that there were a number of settlements on the hill tops of the Simhachalam Hill Range.

As per these inscriptional records, King Krishnadevaraya after defeating Gajapati Prataparudra Dev had visited this temple twice during 1516 and 1519 A.D. respectively. With a treasure trove of more than 252 inscriptions, the Varaha Narasimha Swamy Temple is a very significant historical monument.

As per the belief of the locals, the original deity of Lord Shiva was removed by the Vaishnavite apostle, Sri Ramanuja and replaced with the deity of Lord Vishnu’s avatar, during the 11th Century A.D. The replacement of the deity by Ramanuja, also the founder of Visistadhvaitam of Hinduism, is marked by the celebration of the Kamadahana festival (burning of the God of Love). Currently the Government of Andhra Pradesh has undertaken the initiative to transform the region into a Divyakshetram.

As per legend, Jaya and Vijaya, the two gatekeepers of Lord Vishnu, had disallowed Sanaka, Sanandana and Sanathkumara to get the darshan of Mahavishnu and therefore were cursed by them. As a result of the curse, Jaya and Vijaya were born as demons Hiranyakasipu and Hiranyaksha respectively to Sage Kashyapa. Angered by the atrocities and destruction propagated by Hiranyaksha, Lord Vishnu in the avatar of Varaha (Boar) killed him. Meanwhile, Hiranyakapisu wanted to avenge the death of his brother and therefore to attain immortality, he performed severe penance to Lord Brahma.

One day when Purvasa was travelling on an aerial chariot, with his spouse Urvashi, he was drawn towards the ruins of the temple and an Aakashvani directed Purvasa to cover the idol with sandal paste. The Aakashvani also stated that the Lord would be visible in his Nijaswarupa form only for twelve hours in a year, on the third day of the month of Vysakha. Purvasa rebuilt and renovated the temple.

Unlike other major temples, the Varaha Narasimha Swamy Temple faces the western side (it symbolizes victory). Situated at about 800 feet above sea level, a flight of steps from the foothills of Ratnagiri directly leads to the Varaha Narasimha Swamy Temple. A number of choultries are available on the foothills which houses a number of pilgrims. There is also large amphitheater-like wooden hollow at the entrance of the temple, which is the Lord Narasimha Temple of the Northern Circars. There is also a very bold portal at the entrance of the temple, which is also known as the Hanuman’s Gate. A beautiful Natyamandapam hosts the Kalyanotsavam festival every year.

Kappam Stambham – The Kappam Stambham is one of the pillars of the Mukha Mantapa. The pillar is believed to posses magical powers, which can cure diseases and also bless childless couples with fertility. The word ‘Kappam’ means offerings and the pillar is called so because of the abundant offerings made by the ardent devotees. The temple complex also hosts a square shaped shrine with tall gopuras and a Mukha Mantapa. 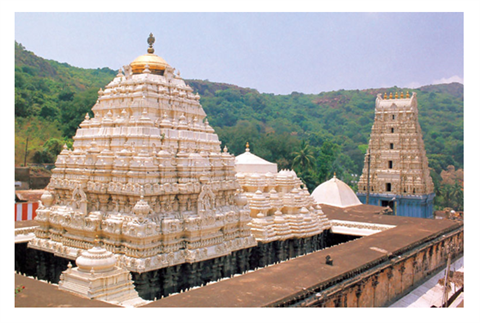