Located in the outskirts of the temple town of Mathura, Uttar Pradesh, Vrindavan was the place where child Krishna was covertly raised by Vasudeva (father) and Yashoda (mother). With around 5000 most architecturally advanced temples of the country, Vrindavan hosts at least 500,000 pilgrims annually. This is the very place which witnessed the childhood, teenage and adolescent life of Lord Krishna. Young Krishna used to mischievously frolic with the gopis in the woods of Vrindavan. Here, he had wooed Radha.

Vrindavan is also a hub of various Vaishnavite groups. Historically, thousands of widows throng this place to spend the rest of their lives here, after shedding all materialistic desires.

The spiritual aura of the place is testified by the fact that when Emperor Akbar visited the place blindfolded, he had a divine experience. Other temples are that of Jugal Kishore, Madan Mohan, Gopinath and Govinda Deva.

Vrindavan – The City Of Temples

Madan Mohan Temple – Located on the riverside, it is the oldest structure of Vrindavan. It was established by Srila Sanatana Goswami and the original Madan Mohan idol was discovered at the base of an old Banyan tree in Vrindavan. It was established in 1580 on the 50 foot high Dvadasaditya Tila. This temple is also famous for it being the spiritual abode of Sri Chaitanya Mahaprabhu.

Govinda Dev Temple – Built in 1590, by the Jaipur royal Raja Man Singh, Govind Dev Temple is a grand 7 storey structure. The Raja was inspired to build this temple after he met Rupa Goswami. Costing ten million rupees and several thousand skilled laborers for five sustained years, the temple is adorned with marble, silver, gold and red sandstone. Today, a replica of Govindaji is worshiped in a makeshift temple, owing to the fact that the original deity was transferred to Jaipur when the Muslim invaders attacked Vrindavan. Govindaji shares the altar with Srimati Radharani and Ananga Manjari.

The temple architecture is directly inspired from the South Indian Style and was commissioned by the Seth family of Mathura. It is dedicated to Lord Sri Ranganatha or Rangaji. Brahmotsava and Ratha Yatra are celebrated here with a lot of grandeur.

Radharamana Temple – Dedicated to Gopala Bhatta Goswami, the seva-puja in the Radharamana Temple was started from 1542. The puja was started especially after the chief deity had explicitly manifested itself on a Vaishakha full moon day from the Shalagram Shila. The name Radharamana literally means, ‘one who gives pleasure to Radha’. Some of the holy artifacts of Sri Chaitanya Mahaprabhu are also placed here.

Sri Radha Gokulananda Mandir – Placed in this temple are the following deities:

Some of the Samadhis located here are as follows –

Sri Gopesvara Mahadeva Mandir – Vrinda Devi had blessed Gopesvara Mahadeva (Lord Shiva) to become a gopi of Krishna. She allowed him to join the Rasa-dance of Lord Krishna and thereafter all the Vaishnavas first pray to him for becoming a servant of the gopis.

Jaipur Temple – Built in 1977 by Sawai Madhav, Maharaja of Jaipur, the Jaipur Temple is one of the testimonies of unparalleled workmanship in sandstone. This temple was built after 30 years of rigorous labor. Anand-bihari, Hansa-gopala and Sri Sri Radha-Madhava are worshiped here.

Shahji Temple – Built in 1876 by Shah Kundan Lal of Lucknow, Shahji Temple hosts the deity of Chote Radha Raman. It is also noted for its magnificent architecture and sculpture.

Krishna Balarama Mandir – Opened to public in 1975, the Krishna Balrama Mandir was built by International Society for Krishna Consciousness (ISKCON). Located in Raman Reti near Vrindavan it was established by A.C. Bhaktivedanta Swami Prabhupada, founder of ISKCON. The temple hosts the deities of Lord Krishna, Balarama, Radha, Shayam Sundara and Gaura-Nitai.

The other important temples situated in Vrindavan are Gita Mandir and Pagal Baba Mandir.

Other Holy Places of Vrindavan

Holi – Celebrated during the full moon day in Phalguna (Feb-March), celebration of Holi starts several days earlier in this place. Colorful processions are accompanied with people throwing colored dye and powder at each other. This is celebrated simultaneously with Gaura Purnima.

Varsana – Groups of men (gopas) from Nandagram visit Varsana to play Holi with the women (gopis). Women hit men with bamboo staff and the men try to protect themselves with a shield.

Nandagram – After celebrating Holi in Varsana, it is celebrated at Nandagram. Huge colorful processions are taken out on this day in Nandagram.

Phalen – The famous legend of Prahlada Maharaja is commemorated here. Holi festival is celebrated here and a huge bone-fire is burnt. The legend has it that going against the will of his father young Prahlada started worshiping Lord Vishnu. When his sister Holika (immune to being burned) took Prahlada in a big fire, such was Prahlada’s devotion to Lord Vishnu that Holika got burnt to death while Prahlada was saved. 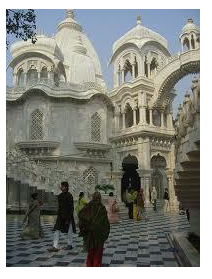 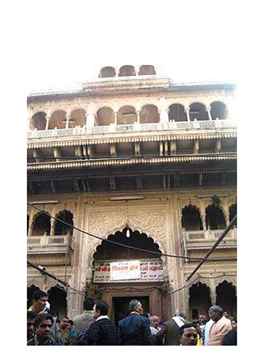