A Bija-Akshara is a seed-letter. It is a very powerful Mantra. Every Devata has his or her own Bija-Akshara. The greatest of all Bija-Aksharas is OM or Pranava, for it is the symbol of the Para-Brahman or the Paramatman Himself. OM contains within itself all the other Bija-Aksharas. OM is the general source or the common seed from which all the particular sounds or secondary seeds precede. The letters of the alphabet are only emanations from OM which is the root of all sounds and letters. There is no Mantra superior to or greater than OM. OM, as it is pronounced ordinarily, is an outward gross form of the real subtle inaudible state of sound which is called the Amatra or the immeasurable fourth transcendental state. As the various Devatas are the aspects or forms of the One Supreme Being, so the various Bija-Aksharas or Bija-Mantras are so many aspects or forms of the Supreme Bija or Mantra, viz., OM. 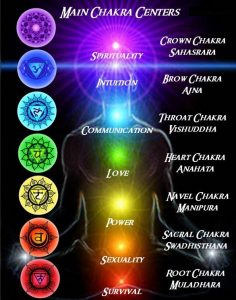 The Bijas of the five Mahabhutas or great elements, i.e., of the Devatas or the presiding intelligences of the elements, viz., Ether, Air, Fire, Water and Earth, are respectively Ham, Yam, Ram, Vam and Lam. The meanings of a few Bija-Mantras are given here, to serve as examples.

OM consists of three letters: ‘A’, ‘U’ and ‘M’. It signifies the three periods of time, the three states of consciousness, the entire existence. ‘A’ is the waking state or Virat and Visva. ‘U’ is the dreaming state of Hiranyagarbha and Taijasa. ‘M’ is the sleeping state or Isvara and Prajna. Study the Mandukyopanishad in detail in order to understand the meaning of OM. 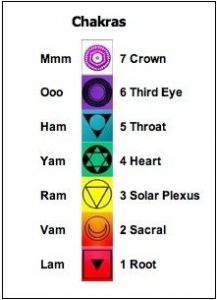 In this Mantra, Ha is Siva. Au is Sadasiva. The Nada and Bindu mean that which dispels sorrow. With this Mantra Lord Siva should be worshipped.

Here Da means Durga. U means to protect. Nada means the mother of the universe. Bindu signifies action (worship or prayer). This is the Mantra of Durga.

With this Mantra Kalika should be worshipped. Ka is Kali. Ra is Brahman. Ee is Mahamaya. Nada is the mother of the universe. Bindu is the dispeller of sorrow.

This is the Mantra of Mahamaya or Bhuvanesvari. Ha means Siva. Ra is Prakriti. Ee means Mahamaya. Nada is the mother of the universe. Bindu means the dispeller of sorrow.

This is the Mantra of Mahalakshmi. Sa is Mahalakshmi. Ra means wealth. Ee means satisfaction or contentment. Nada is Apara or the manifested Brahman or Isvara. Bindu means the dispeller of sorrow.

This is the Bija-Mantra of Sarasvati. Ai means Sarasvati. Bindu means the dispeller of sorrow.

This is the Kamabija. Ka means the Lord of desire (Kamadeva). Ka may also mean Krishna. La means Indra. Ee means contentment or satisfaction. Nada and Bindu mean that which brings happiness and removes sorrow.

In this Mantra, Ha is Siva. U is Bhairava. Nada is the Supreme. Bindu means the dispeller of sorrow. This is the threefold Bija of Varma of armour (coat of mail).

This is the Ganesha-Bija. Ga means Ganesha. Bindu means the dispeller of sorrow.

This also is a Mantra of Ganesha. Ga means Ganesha. La means that which pervades. Au means lustre or brilliance. Bindu means the dispeller of sorrow.

This is the Bija of Narasimha. Ksha is Narasimha. Ra is Brahma. Au means with teeth pointing upwards. Bindu means the dispeller of sorrow.

Sri-Vidya is the great Mantra of Tripurasundari or Bhuvanesvari or Mahamaya. It is also called the Panchadasi or the Panchadasakshari, for it is formed of fifteen letters. In its developed form it consists of sixteen letters and is called Shodasi or the Shodasakshari. The aspirant should directly get initiation of this Mantra from a Guru, and should not start reading it for himself or doing Japa of it, of his own accord. This is a very powerful Mantra and, when it is not properly repeated, it may harm the Upasaka. So it is imperative that it should be got directly from a Guru who has got Siddhi of this Mantra.

The general rule is that this Mantra (Sri-Vidya) should be repeated after one’s passing through certain stages of self-purification through other Mantras. In the beginning a Purascharana of Ganesa-Mantra should be done. Then Purascharanas of Gayatri-Mantra, Maha-Mrityunjaya-Mantra and Durga-Mantra (Vaidika or Tantrika) have to be done. After this the Panchadasakshari and the Shodasakshari have to be taken up for Japa.

Gayatri Mantra is the supreme mantra of the Vedas. Gayatri is the mother of universe, the Shakti itself. There is nothing she cannot do. Her mantra purifies the mind, destroys pain, sin and ignorance, brings liberation, and bestows health, beauty, strength, vitality, power intelligence and magnetic aura. Modern system of treatment is bereft of religion. Anybody who chants the Gayatri Mantra everyday can never be affected by diseases. Mahatma Gandhi believed that it protects both your body as well as soul.