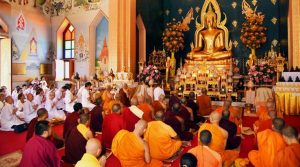 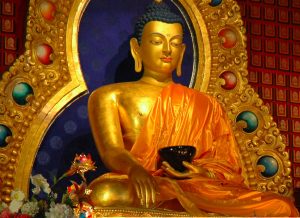 Rituals and Celebrations of Buddha Poornima

Buddha Poornima celebrations were formalised in 1950 in SriLanka at the first conference of the World Fellowship of Buddhists.  On the day of Buddha Poornima, Buddhists assemble at various temples before dawn for hoisting of the Buddhist flag*. This is followed by the singing of hymns in praise of the holy triple gem, i.e The Buddha, Dharma and The Sangha (followers). The day is marked with reading of the Buddhist scriptures, sermons on the life of Lord Buddha, religious discourses, group meditation, processions and worship of Lord Buddha. In some places an image of Lord Buddha as a baby is kept in a basin of water. Devotees pour water over the image symbolising cleansing of one’s Karma and making a new beginning. Buddhists wear white clothes on the day of festival.

Devotees offer flowers, incense, fruits and candles to the image of Lord Buddha. These offerings also symbolise the impermanence of human life. Buddhists decorate their house roof tops with red, blue and yellow flags. As part of the celebrations, the pipal tree or the Mahabodhi tree, where Lord Buddha attained enlightenment is worshipped and offerings are made to the tree. The Mahabodhi tree is decorated with flowers and flags of different colours. Devotees pour milk and scented waters on the Bodhi tree and light lamps around the tree. Bhajans and Aarti also form part of the festivities. Vegetarian food is only consumed on the day of the festival. Buddhists give cash, fruits, clothes etc as charity to the needy during the festival. People also set up stalls in public places and offer drinking water. 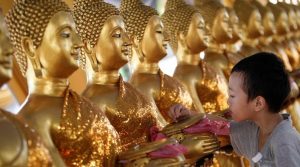 People also vow to adhere to the five principles known as Panchasheel, which are:

In countries like SriLanka, thousands of birds are set free from cages symbolising liberation.  Slaughter houses and liquor shops are closed for two days.

*Buddha Flag is made of six vertical bands of colours. Buddhists believe that these colours are said to have emerged from the aura of the Lord Buddha when he attained enlightenment. The six colours represent the following:

In India, Sarnath, Bodh Gaya, Saanchi and Khushinagar are some of the places where Buddha Poornima is celebrated with religious fervour. A fair is also held in Lumbini in Rupandehi district, the birth place of Lord Buddha on the occasion of Buddha Poornima.