A number of festivals and fairs are held in Jharkhand along with the regular festivals like Holi, Dussehra, Diwali and Eid which are common in all parts of India. Festivals are an occasion to pray, meet and greet, socialize and strengthen bonds in society. 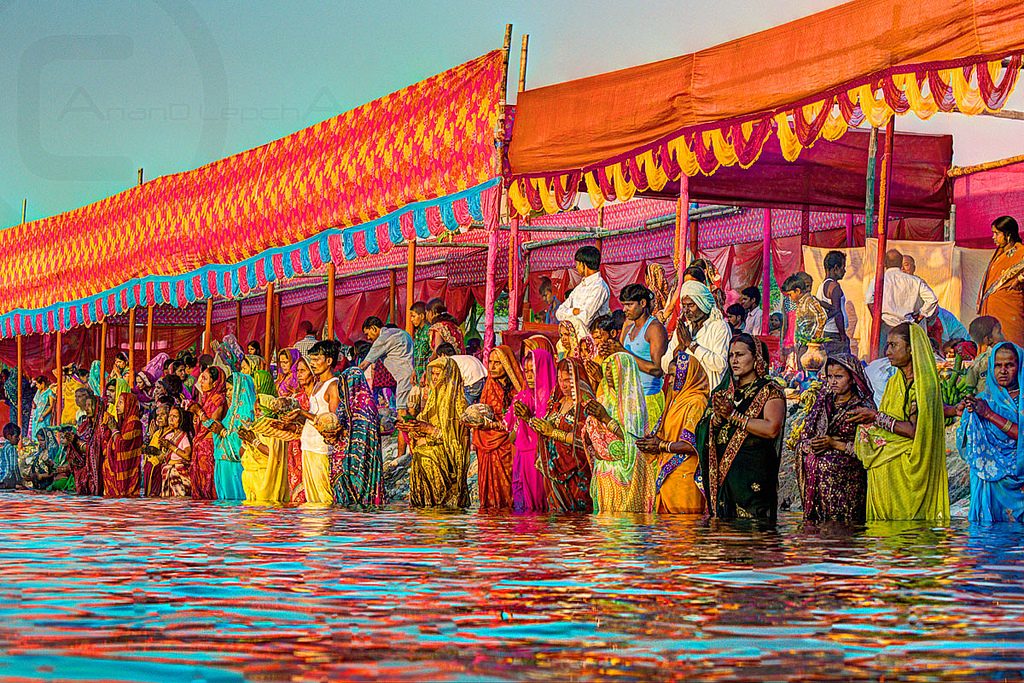 This is one of the most important festivals of Jharkhand and is celebrated twice a year, once in the month of Chaitra (March) and the other in the month of Kartik(November). In this festival with great devotion and faith worship is carried out to the setting sun. Blessings are sought from the forces of nature and the chanting invokes purity and sanctity.

This festival heralds the arrival of spring after the winter season during which kite flying is carried out with ebullience.

This festival is celebrated to strengthen the bond of love between brothers and sisters.

Besides these there are many Melas or fairs celebrated in Jharkhand.

This is one of the biggest and most revered fairs held at Pratappur at the time of Phalgun Shivaratri and visitors come from all parts of the country to participate in it. In this fair various breeds of cattle are promoted and trade relations with existing and new clients are strengthened.

This religious fair is held twice a year in Hunterganj  during Ram Navami and Magh Vasant Panchami and is held at the top of the Kolhua hill which also has an old temple of Goddess Kali referred to as ‘Kauleshwari Devi’ and a water tank. The hill is very steep at a height of 1575 ft and generally tourists have to trek to the hilltop where there is a famous scenic sky view known as Akash Lochan.

This fair is a cattle fair in Chatra dating back from 1882 and deals with the buying and selling of cattle and animals and to augment their attraction the animals are dressed in colourful outfits. It is held on the Durga Ashtami day which is a day before Dussehra.

This fair is also a cattle fair started way back in 1930 and is held on Kartik Purnima day.

This fair is a cattle fair dating back from 1925 and is held on Magh Basant Panchami day at Chatra.

It is a cattle fair held at Simaria on Phalgun Purnima and dates back to 1935.

It is a fair held in Sawan Purnima.

It dates back to 1920 and is a cattle fair held at Simaria during Baisakh Purnima.

Cattle fairs held in different parts of the region help locals from nearby areas to strike a bargain and buy and sell cattle at optimum prices.

It is a religious fair held during Makara Sankranti at Itkhori where there is a temple of Lord Shiva and Goddess Kali.

It is a famous shrine of an 18th century Sufi saint on the banks of the Sat Bahini river in Pratappur. This fair has Hindus and Muslims coming to pay their respects as it is said that this shrine cures people affected by evil spirits. Fairs such as these reinforce the true spirit of the country as they embody the cultural fabric of the people.

This is a harvest festival celebrated on the last day of the month of Paush. Unmarried girls decorate a bamboo or wooden frame with coloured paper and immerse it in the nearby hilly river praying for a good husband.

This festival begins with the fall of winter on the first day of the Magh month considered as the beginning of ploughing. Farmers plough two and a half circles of their land to symbolise this auspicious day.

This festival is celebrated during Kartik Amavasya and acknowledges the contribution of animals in the lives of the tribals. They wash, feed and decorate their animals and sing the Ohira song on the usefulness of the animals. On the last day some sports with the animals are conducted and enjoyed by all.

This festival is celebrated to commemorate the sowing of seeds in the fields. Though there are no songs and dances to celebrate this festival a few rituals are performed. Along with this festival are celebrated other festivals like Chitgomha and Rajsawala Ambavati.

This is the shrine of a saint Data Faham Khyal Shah at Pratappur and this annual fair is celebrated with great pomp and grandeur.

This festival is celebrated in the Tamar region between the spring and summer period and is famous for the worship of Budha Baba. People fast and worship at the tribal Mandir known as Sarana Mandir. After the evening worship Chhou dance with masks and gymnastic postures are performed along with a breathtaking sky dance.

The culture and traditions of Jharkhand are rich and varied and Jharkhand being home to a number of tribes speaking a variety of languages it has a unique history and the Government has endeavoured at various levels to maintain and propagate these art forms to spread the culture unique to the region.