Cultural festivals of Jammu and Kashmir

Jammu and Kashmir is known for the pilgrimage and cultural events on the mountains. This is one of the most revered pilgrimages in Hinduism organised by the Government of J and K. The Yatra is generally undertaken between June and August coinciding with the holy month of Shravan. The main cave temple of Lord Shiva is located at a height of 12,756 feet above sea level and is visited by thousands of pilgrims from all over the country to see an ice stalagmite formed inside the cave. It is considered a holy Shiva Linga and as per religious beliefs, the Linga is said to grow and shrink according to the phases of the moon. This is the cave in which Shiva is said to have explained the secret of life and eternity to his consort Parvati. There are two other ice formations representing Parvati and Ganesha.

This fair is held twice a year in the Bahu fort, which is situated 5 km from Jammu, where the idol of Goddess Kali is worshipped. It is located on a rock which faces the River Tawi. The fort is said to have been built 3000 years ago by Raja Bahulochan from whom the name of the fort is derived. People take a holy dip in the sacred River Tawi and then offer worship at the temple. Joy rides, exhibitions of handicrafts, clothes, and accessories are the other enjoyable displays at the fair.

It is celebrated during Makarasankranti every year and people take a dip in the holy river, wear new clothes, distribute sweets and perform the ‘Chajja’ dance.

This festival is celebrated in the month of Chaitra (March- April) and people take a dip in the holy River Devak also known as Gupt Ganga to celebrate the Northern flow of the river as generally rivers flow North to the South, this river being the exception. This is believed to occur due to the presence of Lord Shiva in the North.

Most of the Ladakhi festivals are based on monasteries and Gompas. This festival is based in the Shachukul Monastery in Ladakh and is marked by a unique dance performance on the lives and stories of Buddhist and Tibetan masters and the triumph of good over evil.

This is a Buddhist festival celebrated in Ladakh to commemorate the birthday of Guru Padmasambhava who fought against evil demons. This is portrayed in dance form to depict the victory of good over evil accompanied by music from drums and horns.

These are death anniversaries of Muslim priests and saints generally celebrated in their shrines. The power and love of the Sufi saints attract people from all religions.

This fair lasts for three days and is dedicated to Lord Shiva and Parvati and is celebrated on the auspicious occasion of Maha Shivaratri.

This festival is celebrated at the Kheer Bhawani temple and is dedicated to Goddess Ragnya Devi in the village of Tulla Mulla which is 27km from Srinagar. It falls in the month of June on Jyeshta Ashtami which is the birthday of the Goddess. Devotees make offerings of lamps, flowers and Kheer (a sweet dish) and pray for the well-being of their families.

It is a carnival where homage is paid to River Indus or Sindhu. People take a holy dip and worship the holy river with flowers and fruits. Homage is also paid to ancestors (Tarpan) and there is a wide reference to this mighty river even in the Ancient Hindu texts and manuscripts.

Tulip Festival or the festival of flowers

This festival is held in the Tulip Garden of Srinagar overlooking the Dal lake at the foothills of the Zabarwan range. It offers breathtaking views and scenic beauty. 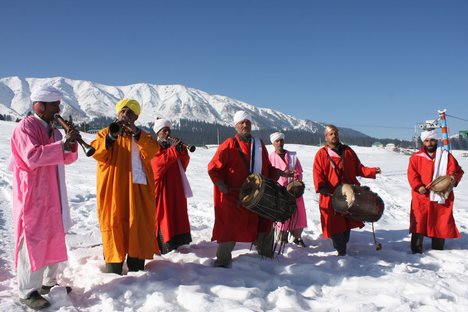 Winter sports activities like skiing, ice skating, ice hockey in Pahalgam, Gulmarg and Srinagar are held involving contests, races and fests which attract tourists from all over the country.

This is a three day Mela held during Baisakhi season which displays handicrafts, paintings, shawls, wall hangings and artefacts of J and K. It also includes food and culinary items famous in the region.

Besides this there are a number of festivals celebrated at Ladakh like Thiksay Gustor, Korzok Gustor, Galdan Namchot, Spitok Gutor Zanskar, Dosmoche and many others generally in the monasteries.