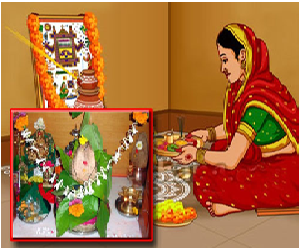 Nomulu means observation of religious rituals, performance of pujas, and Vrathalu means observation of fasting. It is an ancient system which is still adopted in Andhra Pradesh that a married woman must have to follow certain customs and traditions for the wellbeing of the entire society. The details of fasting, and the various methods of performing the puja is mentioned in the holy texts of Hinduism.

It is the duty of every married woman to get up early in the morning, perform pujas and abhishekhams to the holy deities, and must compulsorily offer in the form of food/food grains or in the form of money to the visiting guests and to the poor people.

Kailasa Gowri Nomu is a type of Vratha and it is performed in praise of Lord Shiva and Mata Parvati in Andhra and Telangana by the Telugu community people.

Gowri festival is a main festival and it is celebrated mainly in Andhra Pradesh, and it is celebrated one day before Vinayaka Chaturthi. Devotees used to decorate their puja room with mango leaves, and a statue of Mata Gowri, a form of Shakti Devi, would be kept in their puja room, and turmeric and sandal paste would be applied to the statue of the holy goddess, and grand puja would be done to the holy mother with coconuts and Kalasha, and various Prasad items would be offered to her.

On this day, Hindu women would be dressed in new clothes, and mostly it would be of red Sari, since red colour is very much liked by the holy goddess. Nice Rangoli kolums would be drawn before placing the Kalasha and some quantity of rice would be kept in a plate. Lord Vinayaka is also worshipped along with Ma Gowri, and an idol of Vinayaka would also be kept near the statue of Ma Gowri.

The story of Gowri would be read before the participants of the puja, and after the performance of the puja, Prasad items would be distributed amongst the devotees. The Prasad items consists of sweets like Obattu, and payasa, chitranna and Kosumbari are prepared and offered to the family members, friends and relatives. And the puja continues on the next day also, on account of Vinayaka Chathurthi.

Kedareshwara Vratham is another important vratha, usually observed by the Hindus belonging to Telugu community, and in Andhra Pradesh and Telangana, and this Vratham is popularly observed the people with sincere devotion on Lord Shiva, and it is observed on the Karthika Pournami day.  Devotees would observe fasting and conducts puja to Lord Shiva, who is in the form of Kedareshwar. After the completion of the rites, the offerings would be distributed to the Brahmin priests. As per legend, it is believed that Ma Parvati, has obtained half of the portion of the body of Lord Shiva on this auspicious Karthika Pournami day.

Those who observe Ma Gowri and Kedareshwar Vrata would be blessed by Lord Shiva and Ma Parvati, and they would attain all kinds of prosperity in their life.