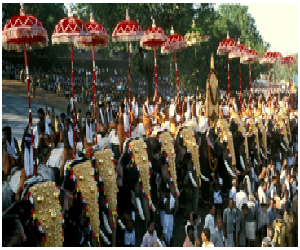 The Thrissur Pooram is an annual glorious temple festival, which would be held in Thrissur, Kerala, at the Vadakkunnathan Temple, dedicated to Lord Shiva in Thrissur, every year on the Pooram festival day.

Thrissur Pooram festival was first celebrated by the king of Cochin during the 18th century AD. During this festival day, lot of elephants would be decorated with costly ornaments and dressed in nice garments, and they would start doing procession inside and in the outside of the temple. Elephants marching would take place in this temple, in order to show the devotees love and dedication on the elephant god, Lord Vinayaka.

As per ancient legend, it is believed that Lord Shiva had once appeared in the dream of the then king of Cochin, and ordered him to celebrate the Pooram festival in the temple. From that time onwards, Thrissur Pooram is celebrated as a grand festival. During the time of this festival, delicious Prasad items would be offered to Lord Shiva, and it also would be offered to the devotees. It is believed that during that auspicious day, the Patala Loka demon King Namuchi, son of the ancient Kerala King Mahabali, would visit this temple in order to worship Lord Shiva.

During the festival of Thrissur Pooram, lot of artists would participate with instruments such as Mathalam and Chendai. At the end of the pooram, Abhishekham and puja would be performed to Lord Shiva, and the devotees would have a glimpse of Lord Shiva, who is worshipped as Vadakkunnathan.

Irrespective of caste, creed and religion, all classes of people would participate and play all types of roles in the festival.  Crackers also would be burnt and children would eagerly watch all those nice events.

Thrissur Pooram is considered as one of the greatest religious festival in Kerala. Lot of people from all over India would participate in this festival and would enjoy the natural greenery and                 scenery of Kerala. Train and bus facilities are available nearby this temple, and it is believed that during the performance of this festival, even the divine demi gods from the heaven would visit this temple, in order to get the blessings of Lord Shiva.