In: Customs And Traditions
With: 0 Comments 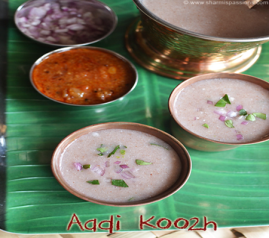 Koozh is a famous offering in Amman Temples in Tamil Nadu, especially during the Tamil month of Aadi, and it is distributed as a holy Prasad item in the Amman temples to the devotees. The Aadi koozh would be very tasty and it would be served along with pickle or with Puli kuzhambu. This holy Prasad item would be prepared using Ragi flour, and onions are also mixed in this Koozh to increase the taste. By drinking the Koozh in the Amman temples, we would feel as if we are consuming the Koozh, prepared by our own mother itself.

This system is in practice for some hundred years, and even during ancient period, people belonging to Tamil Nadu used to offer Koozh to the holy Amman. Ragi Koozh would give chillness to our body, and it refreshes our mind also. Moreover, it is being offered by the divine mother itself. Some people would hesitate to drink the Ragi Koozh in the Amman temples, since it would be usually prepared by the Non-Brahmins. But doing so would result in the curse of the goddess, since she considers all of her creations as equal.

As per ancient legend, once a king who was a staunch devotee of Amman had suffered from severe thirst. Even after drinking several litres of water, he was unable to quench his thirst. Hence he wholeheartedly prayed to Amman to quench his thirst. In one night, Amman appeared in the dream of the king, and instructed him to prepare Koozh using Ragi flour, and after offering it to her, she had asked him to drink the sacred Koozh. As per the divine mother’s advice, the king had also done like that, and he had got relieved from his thirst.

Even in small temples, women devotees would gather in large numbers in front of the Amman temples, and they would prepare the Koozh in the temple itself, and it would be served hot to the devotees. Those who suffer from rare and incurable diseases and those who suffer from mental illness are advised to drink the sacred Koozh, in order to get rid from their ailments. Sometimes, who knows, Amman itself may take some other form, and she herself might offer the Koozh to us. Hence, without hesitation, let us participate in the Aadi month festivals held in the Amman Temples, and let us drink the tasty drink Koozh delightfully.