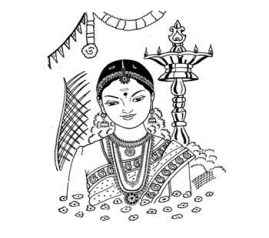 The puberty function also known as Ritu Kala Samskara ceremony is a Hindu ceremony, mostly celebrated in South India, which would be performed once a girl attains puberty (age attainment) and during the time of the function, she used to wear a sari or a half-sari, also known as Dhavani in Tamil. This ceremony is celebrated by the parents by giving invitation to their friends and relatives in order to inform about the puberty attained by their daughter.

During the time of performance of this ceremony, the relatives and friends of the girl would gather, and they would share some jokes with each other in order to make the ceremony to become more interesting, and also they would offer some gifts to the girl. After the completion of the Puberty function, wholesome food would be served to all the visitors in plantain leaves, and some would provide non vegetarian food also to the guests. The guests also would give advices to the girl in order to move carefully with the strangers as a precautionary measure. The system of celebrating puberty function is also mentioned in our ancient texts, and during ancient times, the puberty function would be grandly celebrated by inviting even the people from other villages. And the function would be held before the village deities like Lord Ayyanar, Lord Sudalai Madan and Lord Madurai Veeran, with the belief that these powerful guardian gods would protect their daughter for ever in her life. After the completion of the function, mostly non vegetarian food would be served to all the guests in a pleasing manner.

It is a must for the girls to worship Ma Kamakhya Devi after they attain puberty, since it is believed, that the great divine mother, would follow the young girls like their shadow, and she would protect them like their own mother. Nowadays, the celebration of puberty function is being reduced, by considering that it is out dated and out of fashion event and some girls also might not be having the interest to expose their age attainment before others.