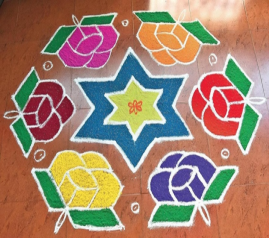 Kolam is an art form, and it is practiced by the people since ancient times, by showing their intelligence in making various colourful drawings in the floor using dry rice flour or Kola Mavu, a kind of flour. Kolam is also drawn using various kinds of colour powders. Most commonly, during mornings, we can hear the noise of some women Kolamavu vendors, who would be shouting in a high pitched voice, “KOLAMAVU VANGALIYU”, which means, “Are you willing to buy Kola Mavu”.

The traditional art of Kolam was first practiced in Tamil Nadu and in course of time, this wonderful art has been spread in other South Indian States, and also in some parts of North India. The practice of drawing Kolam is also found in some Asian countries. During the festival times, we can find colourful beautiful decorative Kolams drawn before the households of the Hindus, and usually it would be drawn by the female members of the households.

Kolam is also called as Rangoli in Maharashtra, and it becomes part and parcel in the households of the Hindus. In some places, Kolam competition would also be held in between few households, and those who draw colourful Kolams with attractive features, would be presented with some gifts by their neighbours, in order to encourage their talents.

Though these Kolams would get destroyed within a few hours, yet the hard work, dedication and sincerity shown by the Kolam makers must be definitely appreciated. During the festivals like Krishna Jayanti and Vinayaka Chathurti, the images of Krishna and Vinayaka would be drawn in the Kolams, in order to invite the divine deities to their homes during the birthdays of the deities.

During the Tamil month of Margazhi, lot of Kolams can be seen before the entrants of the homes of the Hindus. The details about the drawing of Kolams are also mentioned in some ancient Tamil Texts. It is also mentioned that in some palaces of the South Indian kings, big Kolams would be drawn using colour powders by the artists, and they would be suitably rewarded by their kings based on their talents.

But in the present day world, the practice of drawing Kolams are slowly disappearing due to religious conversions, and also due to disinterest in doing this ancient art work. Most of the people are living in flats, and due to that, some of them might lose interest in drawing Kolams, since they might consider that they are only the partial owners for the entire apartment.

Hence let us encourage the ancient art form of Kolam, by drawing lot of colourful Kolams containing the images of our worshipful deities in our streets and also in our Puja rooms, in order to show our expertise in this beautiful art as well as to get the grace of the almighty.