Padayal – Offering Of Sumptuous Food To The Deities During Ceremonies

In: Customs And Traditions
With: 0 Comments 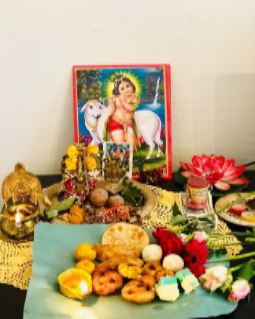 PADAYAL – OFFERING OF SUMPTUOUS FOOD TO THE DEITIES DURING CEREMONIES

“PADAYAL” also known as Battalion in English, refers to keeping variety of food items, in front of the deities, during the times of festivals, and it would be offered to the almighty as a Holy Prasad, and after the performance of puja, it would be distributed to those who attends the puja. Generally a picture of god or goddess would be kept in the puja room, and the food items would be carefully prepared, in a highly hygienic condition, and it would be mostly offered to Ma Shakti Devi during the month of Aadi. Padayal also would be offered to Lord Vishnu during Purattasi month, and during that time, food items must contain Sweet Pongal made out of Jaggery, Tamarind rice, and fruits also must be kept as Padayal before the picture of Lord Vishnu.

During the time of keeping of Padayal, the person who performs the Padayal would invite his near and dears, and some of them would appoint a priest also during the time of Padayal. The priest would perform puja by chanting divine mantras, spread the Padayal in the plantain leaves, and after offering it to the al

mighty, it would be distributed amongst the participants of the puja. It is being done by the devotees as a thanks giving act to the almighty.

Padayal also would be done during the performance of annual ceremonies to our father and forefathers, and the Padayal items would consist of those food items which was very much liked by our ancestors. After the completion of Padayal, the food would be first offred to the crows, and then it would be distributed only amongst the family members of the deceased person. This type of ritual is performed mostly by the Tamil people, and it is considered as a very good practice, since by doing that, we can satisfy both the almighty as well as our ancestors. Those who suffer from Pitru Dosham are supposed to do the Padayal, since by doing that sacred deed they can clear off their ancestral debts.

If we are really interested we can offer Padayal to Child Krishna in our Puja room, by preparing various sweet and snacks items, using pure ghee and butter on a daily basis, since our little Krishna is very much interested in eagerly eating various food items made out of ghee and butter. If we show our true bhakti, he himself would come to our home in an invisible form, and would consume at least some portion of our offering, and would shower his immense blessings on us.