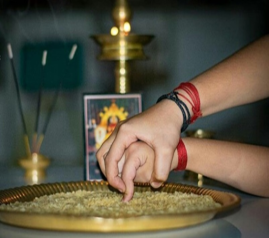 Vidyarambham is an ancient Hindu tradition, which motivates the young children by writing letters and by making them to put the “OM” Symbol in a plate of rice, and usually this function would be held in the temples and some people would perform this wonderful event in their homes also, and the young children would do this writing work with the help of the Vedic scholars or their parents. This event would be performed for the child, those who are in the age group of between 2 to 5 years, before their school admission.

This famous ritual is being done on the auspicious Vijayadashami festival day, particularly in Kerala, Tamil Nadu and also in some parts of Karnataka. During the time of performance of Vidyarambham, children are also would be motivated to learn music, dance, drawing and painting work. Vidyarambham would be performed at the temples or in the homes at the appropriate auspicious time. It would also be performed in Odisha during the Vinayaka Chathurti Festival day.

The Vijayadashami festival day is dedicated for worshipping Ma Durga Devi, and hence the Vidyarambham event takes place during the auspicious Vijayadashami festival Day. Before the start of the Vidyarambham, the children would be insisted to worship Ma Durga and Ma Saraswati in order to get boldness, courage, knowledge and wisdom. After the completion of this function, the children would be made to circumambulate the temple for 24 times, as a token of showing their gratitude to the deities.

Generally the below mentioned mantra would be recited by the children before the commencement of the Vidyarambham.

The meaning for the above Mantra is:

“I humble salute to Lord Hari (Lord Vishnu), Lord Dakshinamoorthy (A form of Lord Shiva who is the divine Guru), Ma Saraswati (the Goddess of wisdom and education), and Lord Ganapathy(The First god Lord Vinayaka).

The child also would be offered with the holy temple Prasad by the priests, and it is believed, that once if they consume the divine Prasad, then they would be able to shine well in their future.