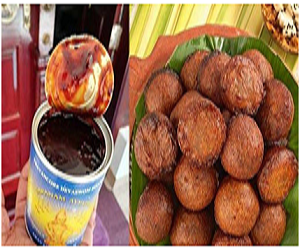 Appam and Aravana Payasam are the auspicious Prasad items available in the Sabarimala Temple. It would be offered to the devotees during their visit to this holy temple. These Prasad items would be prepared in large quantities, especially during the Mandala Puja and Makara Villakku periods. Both Appam and Aravana Payasam would be prepared using fresh ghee, jaggery and rice flour. It would be sold in containers in the Sabarimala temple premises to the devotees at an affordable cost.

As per legend, once a pious good looking girl, Leela, offered this Aravana prasadam directly to Lord Ayyappa, when he was a young boy. Lord Ayyappa tasted this Payasam, and praised her. From then onwards, as per the instructions of Lord Ayyappa, this Prasad item is prepared by the temple management, and offered it to the devotees.

In general, whenever we eat divine Prasad items, we would get a great sense of satisfaction, and we would be addicted to its taste, and would keep on consuming it again and again. Similarly the delicious Appam and Aravana Payasam would remove our hunger and quench our thirst.

Devotees who visit Sabarimala would buy several packs of Appam and Aravana Payasam, in order to give it to their near and dears. According to an ancient saying, “God would dwell in his Prasad Items”. Hence let us try to get the Ayyappa Prasad, in order to consume it wholeheartedly.