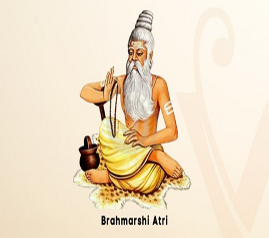 In Hinduism, a Brahmarishi refers to a Rishi who contains more spiritual and meditative powers than others. Brahmarishis are considered as the mind born sons of Lord Brahma. The seven great Brahmarishis are Bhrigu, Angiras, Atri, Vishwamitra, Kashyapa, Vasishta, and Shandilya. Vishwamitra though he was born in Kshatriya clan, but due to his high meditative powers, he become a great Brahmarishi, and his counterpart Sri Vasishta himself declared Viswamitra as one of the great “BRAHMARISHIS”. The wandering sage, Narada is called as “DEVA RISHI”, which is equivalent to the BRAHMARISHI status.

Rishis in general do not like anything in this material world. They are selfless in nature, and they would live a simple and a peaceful life by setting up an Ashram usually in the dense forests, since they mostly prefer to stay only in lonely places, and they would never get afraid from the attacks of wild animals, since due to their great powers, even a lion would behave like a humble deer in front of them. Though they contain high powers, they do not utilise it unnecessarily, and their main aim is to maintain peace and prosperity in the entire universe. But, sometimes if they didn’t get proper respect from others, then out of anger, they used to curse even the divine demi gods. The great Bhagavathas like Prahalada and Dhruva used to highly honour the Brahmarishis whenever they visit their places, and the Brahmarishis also kept great affection and attachment on these two Bhagavathas, since their devotion on the almighty is very high than that of the Brahmarishis.

At this present period, we can also call Guru Raghavendra and Shirdi Saibaba as Brahmarishis, since both of them contain great spiritual and meditative powers similar to Brahmarishis, and both of them are considered as worshipful divine Gurus by their devotees.

Brahmarishis are also having the privilege to visit any world at any time even without fixing up an appointment with the divine gods. They are given high respect in the Indra Loka, since Lord Indra used to consider these great Rishis, as equivalent to his Guru, Sri Brihaspati Bhagavan.