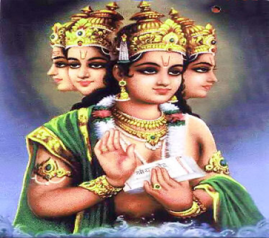 Brahmatejas means the radiance found on the face of the four headed Lord Brahma. We can also found Brahmatejas on the faces of the deities present in the temples. Ma Shakti Devi was described in the “Devi Bhagavatha Purana”, as a beautiful woman dressed in rich clothes, who wears lot of golden ornaments on her body, and her face shined very brightly, and contains lot of Brahmatejas.

The learned Vedic scholars, sages, saints and the divine avatars contain Brahmatejas on their faces, since they constantly offer their sincere prayers to the almighty. In the holy epic Srimad Bhagavatham, Lord Krishna is described as a charming and a lovely boy, who contains lot of Brahmatejas on his face. We can also obtain Brahmatejas, if we become a saint, or if we sincerely worship the god for several years together. The mind born sons of Lord Brahma like Narada, Pulastiya and Daksha contains great Brahmatejas during the time of their birth itself.

In Srimad Bhagavatham, the supreme character, Jada Bharata was mentioned. The great Jada Bharata in his past birth took the birth of King Bharata, and after his death, due to his Karma, he was born as a holy deer, and after the death of the deer, he was born again in the earth, and he was called as Jadabharata, who knows everything about Brahmanda, and also contains Brahmatejas on his face, but still he remained as a dead body, without mingling with others. Once when he was offered for sacrifice to Ma Kali by some hunters, since he contains the features of Lord Brahma, his spiritual powers began to cause severe heat on Ma Kali, and as a result she emerged from her statue, killed the thieves, blessed Jadabharata and disappeared. From this incident we can knew that those who contain Brahmatejas would be having great powers, and that they cannot be destroyed easily by anyone.

In the Bhagavatham, the bhakti of Prahalada is mentioned. Though he was born to a demon, but he appeared like a Deva, and he contains Brahmatejas on his face from his childhood onwards, due to his staunch devotion on Lord Vishnu.

Those who live a pure and a pious life, and those who sacrifice their lives for the sake of others, would get the radiance on their face, and they are considered equivalent to a saintly person.